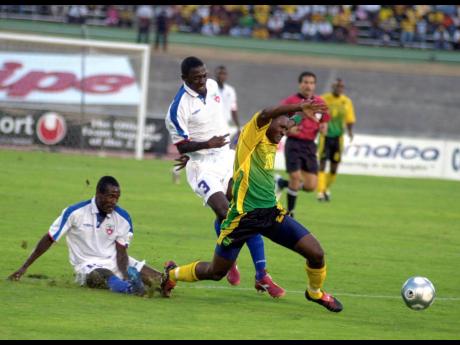 But after a career-ending knee injury forced him into early retirement in 2008, the former St George's College Manning Cup star said he took up an offer from his agent, Patrick McCabe, to be his understudy and he never looked back.

"The passion to become an agent is something I grew into. I never had it during the time I was playing," he said.

"Obviously, my career was shortened due to an injury, and at the time I decided to go back to UCONN (University of Connecticut) to finish my degree, and while finishing my degree I knew there was a chance I might never recover, because I had done three surgeries prior to that," he noted during a live Instagram interview on Friday.

Ralph, who scored a record 12 goals in his rookie season for Chicago Fire, also spent three seasons in Russia with Ruben Kazan. But a knee injury kept him on the sidelines for nearly three years, causing him to call it quits in 2010.

However, his representative at the time, Patrick MaCabe, thought Ralph had a lot of passion, a good personality and had build a lot of good relationship over the years in MSL, and proposed that Ralph shadowed him for a few months and see if he liked the job.

"I took him up (on offer) and started doing it, and as the months went by I started thinking that this is how I could impact the new generation of kids that didn't have the support, and probably need it to give themselves a fighting chance. That led me to want to do it more on long term and for personal reasons, because we (Jamaica) didn't have a lot of experience with good representation. So that led me to become an agent," he said.

Rookie of the year

The former MLS rookie of the year and vice-president of Stellar Group, an agency that focuses on representing professional soccer players, believes players must make the most of opportunities that come their way.

However, Ralph, who represents a large number of current Jamaican internationals and is widely regarded as the country's most successful FIFA agent to date, says despite their large clientele, every client gets their full attention and representation.

"I think we have secured the best financial situation for every individual or client, so it's incumbent on the client to get the job done on the field.

"But you might have a younger player that needs more time, and at this point in my career I don't have that time, so it might best suit him to go to another agent that can put more time into that. But everybody gets enough services and it's not just me, we work as a group and everyone does their thing to help with the clients," he added.