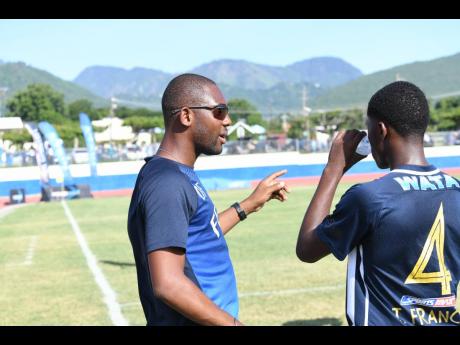 Jamaica College Manning Cup coach Davion Ferguson believes greater unity and higher standards for local coaches will elevate the professionalism of football locally as this, in his mind, will lead to greater respect and compensation for local coaches.

Ferguson also argues that some coaches are using the new Concacaf B licence, the highest form of certification for local coaches which came on stream this year, to unjustly create a wedge between members of the profession.

"A lot of people don't see it as a profession, so we have to start developing that image and respect.

"We have to get the profession registered and recognised as a start," he said.

"But we have to create standards right across the board at different levels."

He noted that these standards can make a big difference in how coaches are perceived and remunerated locally.

"It's 36 months, so it's along that line that I argue for the whole unity of the coaching profession," he reasoned.

He continued: "If I'm offered a job at team A and I tell them these are the things I need, like a trainer, a goalkeeper coach or whatever, and a salary of $10, for example.

"But they call another coach, and because there is no uniformity in terms of our approach, he says he does not need a trainer or goalkeeper coach and will work for $5.

"People might look at you as unreasonable because you are asking for $10 and you want this and that.

"But the only way we are going to move forward is if we are uniform in our approach," he insisted.

He noted that the JMMB level one and level two certification courses have already started to create such standards.

"It follows a certain remuneration package, but while we cannot mandate it (compensation), we can suggest ranges of salary scales, and I saw recently [that] they started a coaches association and that is a step in a good direction, if the people involved are so inclined to fight for the welfare of coaches," he said.

Meanwhile, the 2019 winning Manning Cup coach is not comfortable with the fact that some highly regarded and experience coaches are being marginalised because they do not possess the new Concacaf B licence certification.