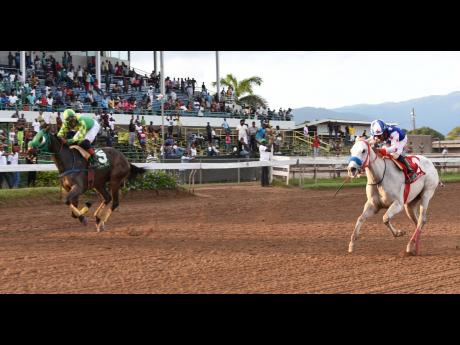 Horse racing at the Caymanas Park racetrack in St Catherine on January 4, 2020.

Jamaica Racing Commission's (JRC) acting senior veterinarian, Dr Sophia Ramlal, says the body hopes to have spectators at Caymanas Park, if the Government gives the go-ahead for racing to resume on June 13.

Ramlal said the JRC has consulted with all stakeholders and have put together what she describes as a 'well-refined protocol' on spectators gathering, to send to the Ministry of Health and Wellness for approval.

"We are the first sporting entity in the country, or in any major racing jurisdiction, seeking to restart," she said. "So we are mindful that we are stepping out and being bold, but we are casting a plan that can work. So much so that we are putting things in place that would adhere to the routine social-distancing guidelines. The complex is large and we would never be at full capacity, so spectators expected to be here will have to adhere to those guidelines."

Ramlal says the JRC has covered all necessary bases in the proposal they intend to submit to the Government for approval, and as long as it can implement all the things it has committed to, and the ministry approves it, she does not see a reason spectators would not be allowed at the venue.

"A maximum has to be set in terms of how many people can be admitted to the racetrack, and that number has to accord with what will be best practice according to the social-distancing guidelines," she said.

Ramlal says if this proposal fails, the JRC may resort to simulcasting racing until the Government is confident it can safely allow fans at Caymanas Park again.

"Everybody will want this to happen but everybody recognised that Jamaica is taking the lead in the world by trying to put on a spectator sport," she said.

"We know we are stepping out boldly, but we are trying to do it in a very scientific way, and everybody will be subjected to screening to be able get on this compound. So we are trying our best and we are hoping we will get it right," she said.