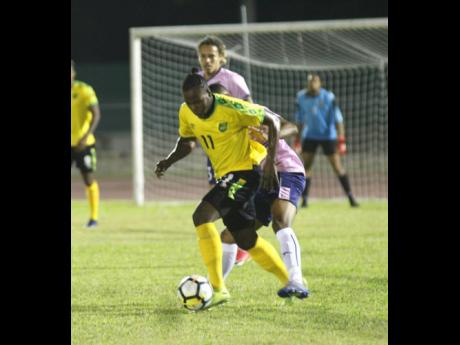 Jamaica’s Jourdain Fletcher (front) getting away from Bermuda’s Reginald Lamb during the international friendly match at the Montego Bay Sports Complex on Wednesday, March 11. Jamaica won 2-0. 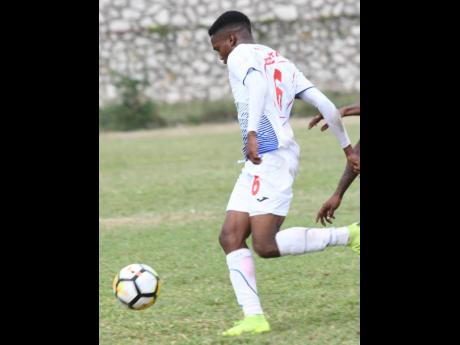 National football team manager Roy Simpson, says a number of the local-based Reggae Boyz gave a good account of themselves in their international friendly against Bermuda last Wednesday and staked their claims for the places in Theodore Whitmore's World Cup qualifying squad.

However, he believes they will have to maintain the standard they have set themselves if they intend to make the final squad for the qualifiers.

"You have to acknowledge the performance of young Lamar Walker, he was outstanding. But he has to now understand that based on that performance he has to bring his 'A' game to every match he plays now. He has set a standard for himself," Simpson said.

The 18-year-old Walker was the main creative source in Jamaica's midfield pulling the strings and threading accurate passes to his strikers up front. He also set up Fletcher for Jamaica's opening goal just before half-time.

Fletcher, who lost his way after leaving Cornwall College in 2017, has rediscovered some form at Mount Pleasant and last Wednesday scored a splendid goal after he picked up a pass from Walker and fired a low shot past the Bermudan custodian from the edge of the box.

"Jourdain Fletcher looks like he is serious now, he looks hungrier and looks like he wants to be part of it (WC) squad," Simpson continued.

He was also quite pleased with how the team played overall and believes the second goal proved local players do possess quality.

"Collectively, we played well, although the consistency and effort from some players could have been more. But they have to understand that it is good to give a good performance against Bermuda but they are also going to be judged by their consistency at the respective clubs.

"Any player can be invited to a national squad, but the technical staff cannot keep you there if your performance is not consistent enough to allow you to maintain your position. It was a good showing and the players played how they were expected to. The first goal was a good one and the second was an excellent counter-attacking play that you would see in any top league in the world. It shows the players have the ability, they must just keep working hard and maintain their consistency at their clubs," he said.