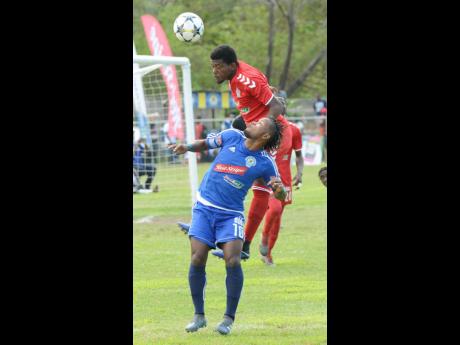 Stephen Barnett (right) from UWI F.C. outjumps and heads the ball away from Kemar Beckford (left) from Mount Pleasant F.C.

The prolific Beckford netted the second goal for the Reggae Boyz in their 2-0 win over the Caribbean opponents, and the goal has motivated him even more to improve his game domestically so that he will be in Theodore Whitmore's plans when the World Cup qualifiers come around.

"First and foremost, you have to give God thanks in everything. I told myself that any time I get the opportunity, I have to do my best and show Jamaica what I can do. They see Kemar Beckford perform so well in Premier League, so I tell myself that I have to execute for the national team when I get my chance," he said.

"All week, the coaches had been talking, so I knew I was going to be in the (starting) 11. I don't know if it was the training sessions, but the feedback I got was good, so I put my mind to starting, and I told myself that if I get the start I need to show the coach what I can do and keep it (place in team) for the next game. And in myself, I feel so happy because I have been waiting so long, four years, and now I get the chance I am overjoyed."

Beckford said that the goal and the fact that Whitmore named him man-of-the-match, inspired him to work harder and do more in the local league.

"When I finished the game, the coach told me I was man-of-the-match so that is a plus for me, doing something good on my debut. Now I have to work hard and wait until the call-up for the World Cup qualifiers.

"So the focus is to do what you can do to get in the local squad. But we are going to go up against more professional players (for places in the team), so I plan to train hard and focus on getting the (RSPL) leading goal scorer so the coach can say Kemar Beckford is doing the work the same way.

"I won't get hype scoring my first goal on my debut for Jamaica. This is like just another normal game for me. I am just looking at the bigger picture and trying to get a contract overseas this season, and scoring that goal gives me that drive to perform more in our league," he said.

"My aim is to take my tally to 20 goals for this season. I am now on 14, and I have shown Jamaica that I can score, and that is what I do best, so I just need to push myself a little bit more and see," he added.