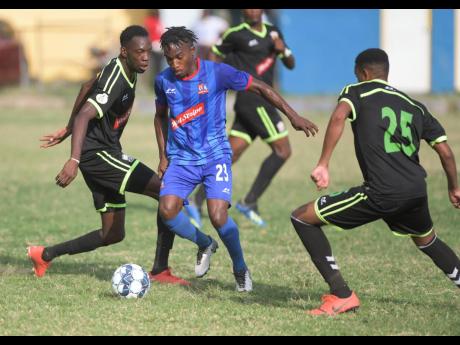 Molynes United coach, Calvert Fitzgerald, says although they are 11 points clear of the relegation zone, he will not rest on his laurels until they are mathematically safe.

However, he admitted that it is difficult motivating his players who are all convinced that they will avoid the drop.

"We want to at least win another game to make sure that we are mathematically safe. But it's kind of difficult to keep the guys focused, because everybody is telling them that Molynes is safe, so I have a (tough) task trying to get them to understand that we are not mathematically safe as yet. But we want to make sure (we are safe) first, so we ask them to put more effort into the games," he said.

Molynes went down 1-0 to joint leaders Mount Pleasant on Sunday and Fitzgerald reasoned that if they can produce more performance like that in that defeat before the end of the round, another win might be possible.

"Last (Sunday) night we played one of the best game. We ran a tough Mount Pleasant team very close, so I am keeping my fingers cross that that mentality stay with us through the other games we have to play and I see no reason why it (mentality) should really change now.

"We really gave as much as we got from Mount Pleasant and I hope they (players) will keep that frame of mind going into the game against Waterhouse Sunday," he continued.

Molynes have 29 points from 28 games and a win Sunday would ensure their safety mathematically for another season.