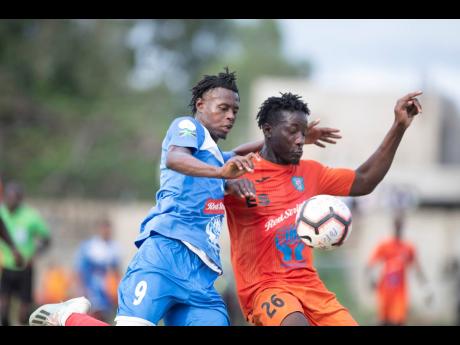 The five time champion hovered over the relegation zone for much of the first round, but have come into their own since the second round and have hit their strides in this third round. The west Kingston side also followed up their 4-3 win over leaders Waterhouse last weekend with this impressive victory away to the defending champions and coach Philip Williams was happy to be in the top half of the table, and a play-off spot, for the first time this season, even though it may be just temporarily.

"The result is a very welcomed one for us. We have been knocking on the door for some time in terms of finding ourselves in the top six. Even if it is just provisionally based on what happens tomorrow (today) in the Arnett Gardens (v Cavalier) game. But it's a good feeling to actually be in the top six, hopefully, we can put together some more matches like these and secure ourselves there," he said.

Tivoli have only lost once in their last 13 games and Williams is hoping they can keep their momentum going. "It's about keeping ourselves there in the top six, we know we have the ability and a squad that is deserving of being in the play-offs and the players and coaches are working hard to achieve that goal," he said.

Portmore dominated the opening minutes of the contest but were unable to break down a no-nonsense Tivoli defence.

But although Portmore was having the better of play, it was the visitors who took the lead after 18 minutes, when Portmore failed to defend properly on a corner and the ball struck the hand of a Portmore defender inside the area, and Jermaine 'Teddy' Johnson converted the spot kick for the opening goal.

Tivoli gained the momentum after going ahead, and Portmore soon regained control of the game towards the end of the half, but they failed to really trouble the visitor's goal.

After the break, Portmore continued to press their opponent but still found the Tivoli defence too stubborn to penetrate, as even though they dominated possession for most of the second half they hardly tested Davian Watkins in goal for Tivoli.

Portmore coach Ricardo Gardener said poor defending let them down. "It's a tough loss, it was a clear penalty but I thought we could have defended a little better the ball that caused the penalty. But from there, we controlled the game and got some good deliveries in the box and should have put away one of them," he surmised.

Tivoli climbed to sixth with 40 points, two adrift of Dunbeholden and Portmore on 42 each.

Meanwhile, seventh-place Arnett Gardens (38) can reclaim sixth spot when they take on eighth-place Cavalier (36) in the Monday night game at Stadium East this evening at 8.00pm.