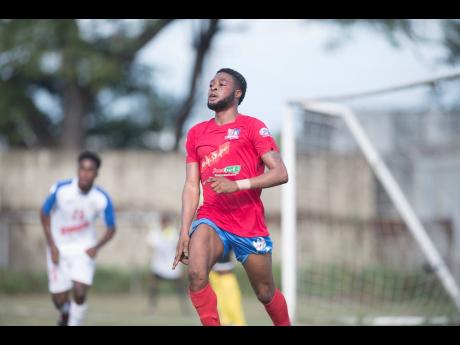 Dunbeholden coach Ricardo Smith says the team is now concerned with the dip in form of the team's leading scorer, Dean-Andre Thomas, who has not scored in 2020.

Thomas, who has scored 12 goals in 20 Red Stripe Premier League matches, has not found the back of the net since bagging a brace in his team's 3-2 win over Molynes United on December 29. He has now been overtaken by Mount Pleasant's Kemar Beckford on the goal-scoring chart. Smith said the striker's form is now becoming a worry.

"It has to be a bother because he (Thomas) is someone who has always bailed us out with goals. But he is working hard and we know it (goal) is going to come, just give him a little more time," Smith told STAR Sports after Dunbeholden fought back to earn a late 1-1 draw against Vere in their RSPL game at the Wembley Centre of Excellence on Sunday.

The St Catherine club has now failed to win in their last three matches and with seventh-place Tivoli creeping up on them and Cavalier and Harbour View lurking, Smith said they are looking to change things up a bit before they lose their grip on the top six.

Smith said they are not now getting the results they are seeking and things have to change. "We can't wait for it to change on us, we have to make the change," he said.

Dunbeholden are currently fifth in the standings with 39 points, one more than sixth-place Arnett Gardens (38). However, they are being closely pursued by Tivoli (37), Cavalier (36) and Harbour View (35) and Smith said failure to get the maximum points from bottom-of-the-table Vere on Sunday was a wasted chance to strengthen their position for a second-round spot with seven games to go.

"It's an opportunity lost. We didn't carry out instructions and we weren't committed to the tackles. We can't be happy with drawing against teams at the bottom of the table and we haven't won in three games so we can't be happy," he said.

Kemar Beckford leads the scoring table with 13 goals after 26 games, he is followed by Thomas and Arnett Gardens' Kemal Malcolm on 12 each. Waterhouse's Colorado Murray and former Portmore striker Cory Burke are next with 11 each.