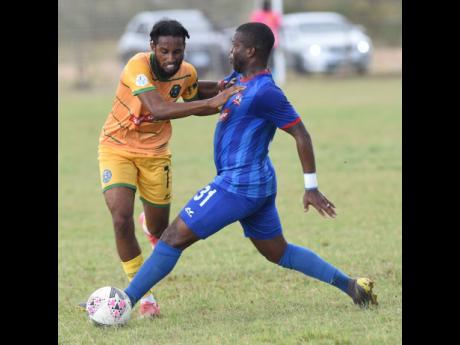 Romaine Plummer fired Vere in front after 11 minutes but Dunbeholden secured a point through Nicoy Christian's penalty in the seventh minute of added time.

"The two teams got chances, they were more dominant with the ball but we were more purposeful," Cephas said.

"But the football need more proper coaches and proper referees to keep the standard because the standard now is falling down, because some referees are in favour of some team, the big teams and it show all the while. It's like a body of people running football.

But the referee made a difference because from the first half he didn't control the game at all," he commented

Dunbeholden almost took the lead on the opening attack but Andre McFarlane could not beat goalkeeper Romaine Sampson from close range.

The visitors continue to dictate play while searching for ways through the host defence.

However, it was the home team that took the lead after 11 minutes when Plummer slammed an unstoppable shot past Eric Edwards in goal.

Dunbeholden came out in the second half and pressed the home team for the equaliser but Vere was always dangerous on the break, and in the 53rd minute only a good save from Edwards prevented Barrington Blake from putting Vere two nil up.

Andre McFarlane had a great chance to level the game on 65 minutes but he fired high and wide.

Saneeki Burton also had a glorious opportunity to draw the visitors level but he dragged his shot wide with only Sampson to beat.

However, Javier Brown should have killed the game off for Vere in time added when he broke away and had Edwards at his mercy but he blasted over the bar.

Dunbeholden then went straight up field and when Shamar Nairn was brought down in the box referee Weston Costley didn't hesitate to point to the spot.

Dundeholden coach Ricardo Smith said it was an opportunity lost by his team.

"It's an opportunity lost. We can't be drawing against teams at the bottom of the table, and we haven't won in four games so we can't be happy," he said.

Dundeholden stayed sixth with 36 points, while Vere remain at the bottom despite joining UWI on 18 points.