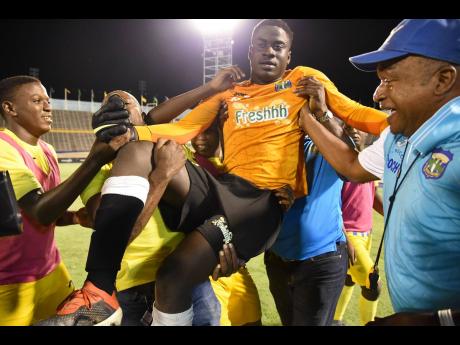 File Prince Daniel Smith (centre), goalkeeper of Clarendon College, is carried off the field by teammates and supporters after they defeated Jamaica College on penalties to win the Olivier Shield title for 2019.

Chairman of the Inter-Secondary Schools Sports Association (ISSA) football competitions, Oneil Ankle, is almost certain the 2020 schoolboy football season will start later than usual, likely in October instead of in the tradition month of September.

However, Ankle, the principal of Jonathan Grant High School, told STAR Sports following yesterday's meeting between the association and Manning and daCosta Cup coaches that they are still in early discussions in regard to devising a way forward for the 2020 schoolboy football season, as the coronavirus pandemic brought sports to a standstill for the months of March and April.

"We are still in the discussion phase. We are trying to get the views of the coaches, as last week we had discussions with the sponsors to see where their minds are, and we will meet with the principals in a week or in two weeks to get an idea where their heads are, and then we will meet as an executive and formulate a plan going forward.

Ankle reasoned that when schools start in September some will not start training until that time, because of the government protocols to combat the virus, and he said the association is working on its own safety protocols that will govern ISSA competitions.

"We may well have to issue some sort of protocol as an association, so we are asking coaches not to go about having training sessions, because the protocol that currently exists is to safeguard our students, and their safety comes first," he said.

"We want to have a (full) season but everything is dependent on what is happening on the ground regarding this virus. If we manage to contain it and the authorities say we can go ahead, we will go full speed ahead. But if we do have a season it will not start until October, and we may well start the season with under-16 instead of the Manning Cup, and pick up the Manning Cup somewhere along the way. So we would pick up the Manning Cup about mid-October," he added.

Some coaches have suggested the association discard the knockout competitions in order to ensure they have a schoolboy football season this term however, he says everything will depend on the timeline they have available.

"A few coaches came up with that suggestion that we could forgo the knockout competitions, and just have daCosta Cup and Manning Cup, which we are looking at that as an association and its possibilities. But it all depends on when the season starts. If we can have the full season then certainly we will want to have those (KO) competitions, but if we can't have a full season but we can have a season where we can just have Manning and daCosta Cup and Olivier Shield, then certainly we are going to have that.

"But we are still in the discussion mode, we are still hearing from persons, we still want to get the feedback before we commit ourselves to something thing. We don't want to put a date out there and have to change, so we are still discussing. But by the end of June we should have something (concrete) to tell the public," he added.