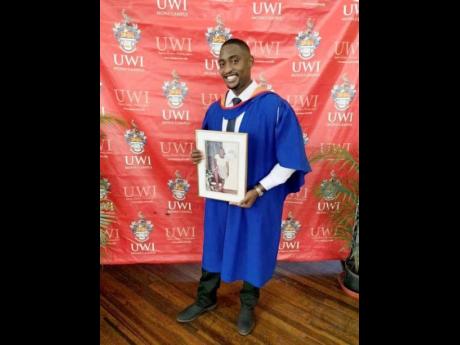 For Rickardo Witter, completing his studies at the University of the West Indies, Mona, was a bittersweet moment.

While he is elated to have received his bachelor of science degree in marketing, he wishes that his mother, Donna Lewis, was alive to celebrate his success.

"My mother always stressed 'Kardo, me want yuh pass the worst' and I finally did it. She always encouraged me and she said she wanted to see me become something in life," he said.

Witter, 25, grew up in Linstead, St Catherine, with Lewis as the breadwinner. She was a cook in the Linstead Market but was blind, and diagnosed with diabetes in 2008, when he was 13. To provide for his mother and himself, Witter decided to sell ice and bag juice in the market. But only two years after diagnosis, Lewis died.

Her death severely impacted Witter's studies at Charlemont High School, and he had to transfer to Dinthill Technical High School.

"When she died, I had to repeat grade 10 because I wasn't focusing on school, I was getting bad grades. But I got 10 subjects at Dinthill then I moved on to St Jago for sixth form, where I got eight units of CAPE (Caribbean Advanced Proficiency Examination)," he shared.

The transition from high school to university was difficult for Witter, as he was unable to decide his next step.

"I decided to go to UTech for sports management and I spent a semester. In that semester, I stayed in the library and bathed in the auditorium. I ended up switching to UWI in January 2016," Witter explained.

At UWI, Witter had no money to enrol into the programme, and he neither took student loan nor applied for grants or scholarships. The only funding he received was in his first year, $50,000 donated by his church, Linstead Pentecostal. This was just 25 per cent payment of his tuition.

He made money for himself as a personal trainer at the UWI gym, training students between his classes. He was qualified to do so after attending the National Aerobics and Fitness Trainers Association in 2017 and earning a certificate in nutrition from the Health Sciences Academy.

"I was able to use that money to pay my rent, buy food and tuition. Every week I would be at the cashier, that's where I banked my money," he joked.

He admitted that sometimes he was short of funds to pay to sit his exams, and despite maintaining a decent grade point average, at times he had to re-sit courses.

"I didn't even know how I would do my final exams last year, I just didn't have the money. I literally paid the money on the day of my final exam," he said.

On Tuesday, when he took his graduation photographs, he held a picture of his mother. "I had to take her picture with me that day, because she would've wanted that for me. This is my gift from me to her," he said. "I'm a living testimony that you can definitely achieve whatever you want as long as you put in the work, stay disciplined and don't let your situation demotivate you. Find your 'why' in your life and stay focused on it."