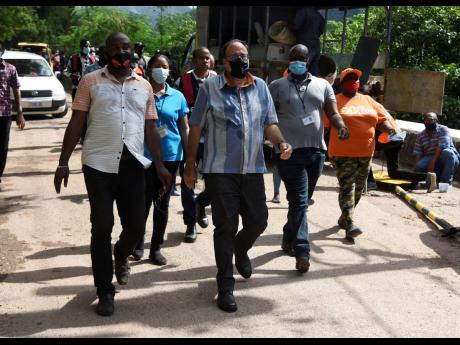 Leader of the Opposition, Mark Golding (centre), in Gordon Town where he viewed the effects of land slippage in Stand Up Hill. Golding toured sections of St Andrew that have been severely impacted by heavy rains.

Opposition Leader Mark Golding has pushed back at suggestions that residents of Weise Road in Bull Bay, St Andrew, must be relocated following extensive flooding.

Golding yesterday toured the area and spoke to citizens whose houses have been covered in silt and rocks from the Chalky River, which runs adjacent to the community, since it burst its banks on Sunday.

"This is a well-established community, they are not little squatter dwellings. Families have grown their children and they bought these properties and they have papers to show for it. They need to just invest in fixing the river and ensuring the river banks are properly protected so that this is not repeated. There is no need to relocate residents and they don't want to be relocated," he said. "I'd like to see more done to assist the residents because the work is really being done on the river, to clear it, but in terms of the community, I don't think anything is being done and that is not fair because they need help."

Prime Minister Andrew Holness announced in Parliament recently that the Government intends to establish no-build zones, for at-risk communities that are flood prone.

However, one resident, Fitzroy Lovelace, believes the community needs to be evacuated immediately. "It a go happen again. From Monday me a clean and I don't reach no where yet. Them should just organise somewhere weh everybody can go. I feel we should be relocated right now," he said.

Lovelace, 61, has lived on Weise Road for more than 50 years, and is hoping there will be preparations made in light of the rains expected to be brought by Tropical Storm Theta this weekend.