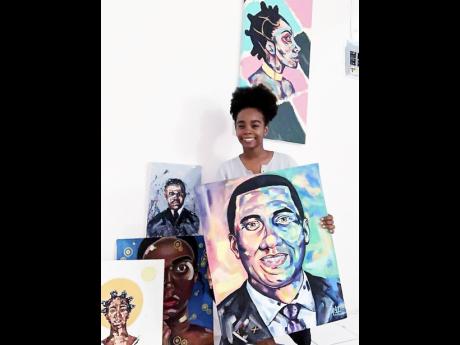 Shana-Gail Young shows off some of her pieces titled ‘Andrew Holness: Man of the People’. 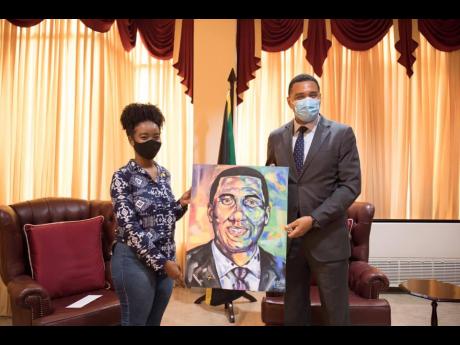 Shana-Gail Young presents Prime Minister Andrew Holness with one of her art pieces, Andrew Holness: Man of the People. The prime minister has contributed $250,000 to Young, who is seeking to complete a bachelor’s degree in civil engineering, which she started in 2014.
1
2

Shana-Gail Young was in her final semester at The University of the West Indies (UWI), Mona, reading for her bachelor of science degree in civil engineering when she encountered great financial difficulties.

Young, 25, needs to come up with more than $1 million that she owes to the university before she can be re-registered to complete the three courses she has outstanding.

In order to clear her debt, she decided to sell art pieces as a last resort. "If it doesn't work, it doesn't, but at least I've tried. I've tried everything. I've written letters, I've done fundraisers, I've done it all. This is the one thing that I haven't tried with and it seems to be working," the aspiring engineer told THE STAR.

Her story was spublished in this newspaper on October 14, and it gained the attention of many persons, including Prime Minister Andrew Holness.

She had done a painting of the prime minister titled 'Andrew Holness: Man of the People'. Last week, Holness, touched by her story, contributed $250,000 towards Young's readmission efforts.

"An old schoolmate of mine shared the story with someone she knew who worked at the Office of the Prime Minister. She contacted me after I made the post on social media and arranged for the meeting," Young told THE STAR.

Holness, in a post on social media, said he was "was very touched by her story," adding that "hers is a story of determination and perseverance".

After successfully completing her first and second years of study, things took an awful turn in her second semester of third year.

Young said she met with the prime minister on Thursday October 22, where the two spoke at length about his commitment to ensuring she is given the help to complete her degree.

The Holy Childhood alumna is glad that Holness took the time to not only hear her story but to lend a helping hand.

"No matter how this goes, I really appreciate him taking the time out to not only meet with me, but actually listening and being genuinely interested in what I had to say," she said.

Young said has been receiving a positive response from the public and overwhelming requests for artwork. She is hopeful that she will clear her debt by January 2021, at the start of the new semester.

"All the horrible experiences, every single valley, every single night I went to sleep hungry, crying and praying for a way out, I'm grateful that it lead to this point and it makes it worth it," she said.