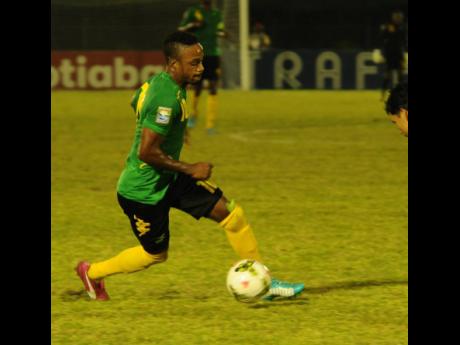 Junior Flemmings dribbles the ball during a Concacaf Under-20 game against Aruba at the Montego Bay Sports Complex in 2015.

Jamaica and Phoenix Rising duo, Junior Flemmings and Kevon Lambert, received a major endorsement from Chelsea legend and Phoenix Rising co-owner, Didier Drogba, who stated recently that current Chelsea boss Frank Lampard should take a look at the Jamaican pair, who he believes can improve the quality of the London club going forward.

Drogba, Lampard's former teammate, said the former England international has done a great job with his young squad so far in his first season as coach with the club. The Ivory Coast forward Drogba, it is understood, made personal contact with the 'Blues' boss to tell him of the two prospects and that the club will be even stronger with the addition of the two Reggae Boyz.

"Lampard is doing a wonderful job with the talent that he already has at the club: Chelsea now have a very bright future, but if the club boss is to improve the side in the coming windows, he needs to focus his attentions on a few world-class signings.

"This young Chelsea side may be able to get the club back into the Champions League places and possibly challenge for some silverware but it will not be good enough to challenge the likes of Manchester City and Liverpool unless some big talent is added to the side," icfootballnews.com reported.

"We are sure that Flemmings and Lambert are very talented youngsters but they are just that, talents! So Lampard should not make a move right now unless he feels that one or both can come in and make a difference on this side," he added.

The 22-year-old Lambert has been in the United States Soccer League (USLC) with Phoenix since 2017, while Flemmings joined them this season after previous stints with New York Red Bulls and Tampa Bay Rowdies.

Flemmings, the team's leading scorer, has netted 16 goals in the second-tier American soccer league system, from 29 matches. While defensive midfielder Lambert has also put together some stellar performance in midfield during that time. Drogba is confident the Jamaicans have what it takes to make a difference at Chelsea and has urged the former goal-scoring midfielder to take a good look at the Jamaican pair.

Chelsea and Lampard are also unable to delve into the transfer market due to a transfer ban imposed by FIFA. But the club is set to have its appeal date for the ban on November 20, and there has been a lot of speculation in the media suggesting that Lampard will get the opportunity to add to his side over the coming months, in order to help improve the team for the second half of the season. But despite being linked with some big names, club legend Drogba is convinced that his former Chelsea teammate needs to take a look at the talented Jamaican duo of Lambert and Flemings.