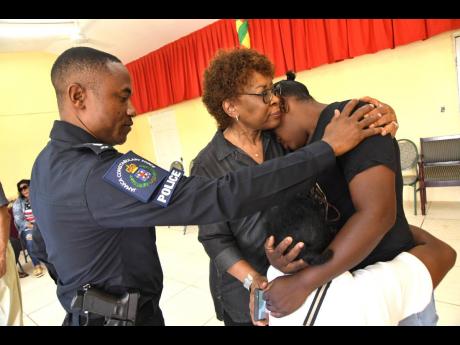 Bothered by the high level of murder plaguing the country, Michael Archer, the managing director of Archer's Funeral Home in Spanish Town, St Catherine, has urged the Government to resume hanging.

At the same time, Tennyson Cornwall, director at Tranquillity Funeral Home in Kingston, said that drastic measures are needed to bring a halt to the out-of-control murder rate on the island.

A total of 1,108 people have been murdered in Jamaica between January 1 and September 17, statistics obtained from the Jamaica Constabulary Force (JCF) has revealed. A staggering 50 murders were recorded between September 7 and 17.

The funeral directors, contacted for comment on the grave problem facing the country, urged the Government to implement drastic measures to bring the situation under control.

"I am very tired of the senseless killings. I do not condone it," Archer added, before addressing the 'street talk' that owners of parlours see Jamaica's high mortality as profitable.

"The man who dead, you don't know if you, the funeral director, would not be that person tomorrow morning, tomorrow evening, or today in the day, because when gunshots a fire, and when man go fi kill man, yuh no really have to do a man nothing for him to kill yuh," Archer said.

"The man or the woman who is murdered could possibly be my mother or father. Your wife, my sister, our children, our aunt and even our class teacher. It cannot get any more gruesome than what is happening now. I am saying there should be capital punishment to match what is happening," he added.

Although capital punishment is still on the books, Jamaica has not carried out the death penalty since 1988.

Like Archer, Tranquillity's Cornwall said he is tired of the senseless killings. He said that the volume of bodies and the gruesome nature of the crimes have been affecting his workers.

"I have to increase counselling and certain guidance for my staff because as it sometimes become too much. You go on a scene and you have to pick up persons on the road with their heads blown off, and that is very sad," said Cornwall.

Tranquillity is contracted to the Ministry of National Security to provide morgue services for bodies in Kingston and St Andrew, which means it is responsible to collect and store bodies to be autopsied.

"The violence in our society is of grave concern and it is becoming the norm; people were at a football field and people just come and shoot randomly. ... These guys are getting more brazen and they don't care about people. Anywhere you are you can become a victim to gun violence," Cornwall said.