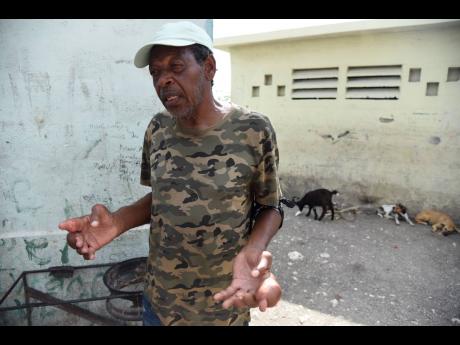 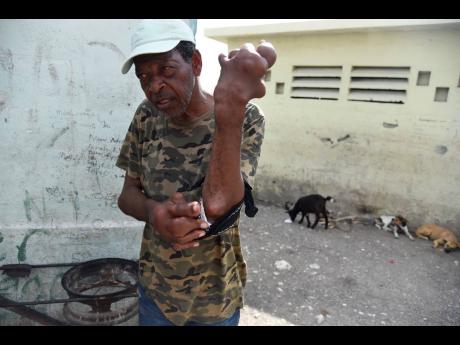 Kenneth Francis, a resident of Rae Town, Kingston, suffers from a condition which is believed to be gout.
1
2

Kenneth Francis tried hard to hide his tears when he spoke about his experience with a medical condition he has been living with for the last nine years. The former jeweller suffers swollen joints on his fingers, toes, knees and elbows.

Francis, 58, believes he became affected with the condition after he did a heart surgery at the Kingston Public Hospital in the 1980s, after he received a stab wound in his chest.

"I left Jamaica after the surgery and shortly after I returned, I see one finger start swell up, and when I go to the doctor, them take test and everything, and they say they never see anything like this yet," Francis told THE STAR.

The Rae Town, Kingston, resident struggled to hold the bottle of beer he sat drinking with his friends when THE STAR caught up with him on Tuesday. He said he oftentimes feels pains in his fingers, and would see redness in the affected region.

"The pain I feel worse dan gunshot. When dem yah get red enuh, uric acid inside of them and when they acid and blood mix, yuh know is pure pain I feel. I cyah sleep a night time," the father of three explained.

Francis said that the condition prevents him from gaining employment. He also shared how he is ridiculed and ostracised by members of the public, and even lost lovers. He said that his condition was never diagnosed by a doctor, but based on his research, he suspects that he has gout, a medical condition caused by an overabundance of uric acid in the body.

Clinicians said that lowering the level of uric acid, through medication and diet, is key to treating gout, which has been categorised as a long-term disease.

Francis, who also suffers from a heart condition, says he is at his breaking point.

"I give thanks every day but I don't know how these just appear on me. I am glad I did the operation because them save my life, and I could've died, but dem mek some mistake weh them never fix back something," Francis said.

This newspaper has seen no evidence to support Francis' claim that his condition could be a result of negligence or malpractice.

In the meantime, Dr Elon Thompson - immediate past president of the Jamaica Medical Doctors' Association - who is a urologist, said based on what was explained to him by THE STAR, a medical examination would be required for a proper diagnosis. He also said that it is important that doctors clearly explain patients' diagnoses to them.

. "We have to put systems in place to ensure that persons understand their diagnoses so that they don't go away with misconceptions, and that they understand their diseases better, so they are better able to manage them and deal with them psychologically, socially and medically," Dr Thompson said.