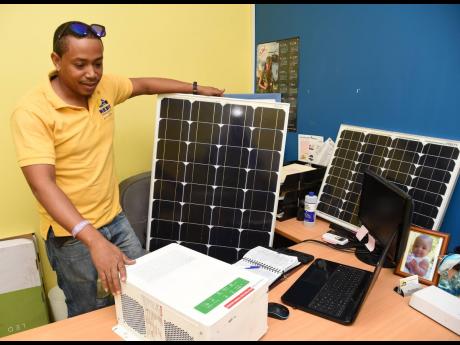 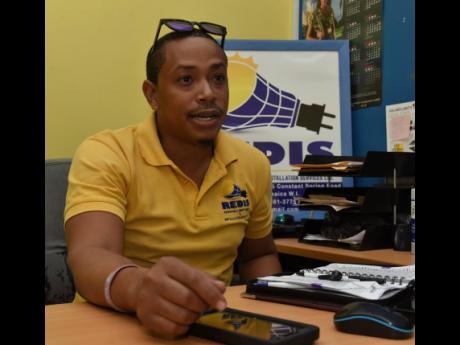 Mills says it gives him pleasure to help Jamaicans cut their energy costs.
1
2

There has been renewed discussion of Jamaica achieving a target of 30 per cent use of renewable energy by 2030.

And Kevin Mills, a renewable energy specialist, is dedicated in helping reach that target by getting Jamaicans to utilise alternative energy solutions such as solar power, wind energy, and liquified natural gas.

Mills, 35, told THE STAR that he thought he would have ended up in a 'traditional career', until he got to the University of the West Indies.

The Kingston College graduate said it is a known fact that energy from the sun and wind is renewable, and the more he studied, the more his interest was piqued.

"That's the direction the world is heading to as well, because coal and fossil fuel are becoming very much outdated because of the pollution associated with that. And I have been a very conscious youth as well, so I'm staying in the green world," Mills said.

Mills, a father of one, has 11 years experience in the field and has since started operating his own renewable energy solutions business. He encourages Jamaicans to invest more in renewable energy, and suggested solar panels are a good choice for home.

"When I install a 20-kilowatt system and I've seen a customer's bill leave from $100,000 a month to $10,000 a month, that make me feel good and I would have assisted that customer become less dependent on the JPS, because once you have solar, you are more self-sufficient and that is good thinking," he said.

In addition to his master degree in alternative energy, he believes he's good at his job due to his natural inclination for physics and mathematics, his willingness to learn, and a true passion for alternative energy.

He admitted that going solar is not 'cheap', but encouraged persons to view it as a long-term investment. He also noted that there is a misconception that having solar power means you have an unlimited source of energy.

"Once you have a solar system, when light gone you supposed to have solar power. For battery-based system, that is the case yes, but for grid-tied, which is what most properties use, that is not the case. Once JPS gone, solar gone too because the solar component is synced with JPS properly," he said.

Mills hinted that in the near future there may be a problem with locating efficient sources of energy and clean drinking water but he said he is dedicated to using his knowledge and skills to help achieve the goal of the National Energy Policy.

"They say if you love what you do, you'll never work a day in your life. I enjoy what I do, I love the sun. Renewable energy is where the passion is, and it just comes naturally for me," he said.