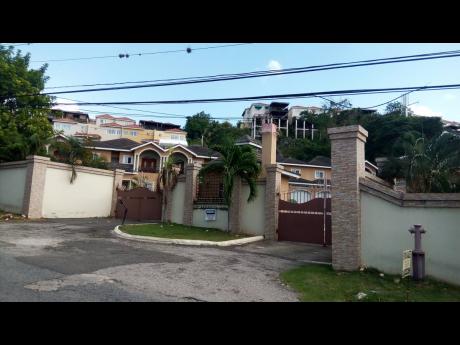 A St Catherine man who was wanted by the police and said to be a member of an alleged hitman gang was fatally shot by cops following an operation carried out on the premises of the upscale Mango Walk Country Club, in St James on Monday evening.

Four others persons, including a female and two other wanted men, were taken into custody.

The police say the alleged hitman, who goes by the names Kimani Brown and Damian Mitchell, hails from Passage Fort in St Catherine.

He was being sought by the St Catherine police for a double murder along Golden Spring Road, in Stony Hill on December 11, 2019.

His co-accused, who has been identified as 31-year-old Dwayne Anthony Ferguson, otherwise called 'Greasy' or 'Kevoy Davis', labourer of Patrick Drive, Kingston 20, was taken into custody.

Others taken into custody were: Peter Junior White, who was being sought by the Constant Spring police as a person of interest in relation to a shooting incident last year; a 24-year-old female nail technician of Kingston 19; and a 21-year-old male student.

Reports by the police are that shortly after 6 p.m., a team of officers acting on intelligence, carried out an operation at a house located in the Mango Walk Country Club.

The police say upon entering the house, the now deceased pointed a gun at the team, and they took evasive action and opened fire killing him on the spot.

A Smith and Wesson pistol loaded with six .38 rounds was taken from him.

Further search of the house led to the seizure of 10 additional .38 rounds. All the occupants of the dwelling house were taken into custody.

The Independent Commission of Investigations is now carrying out an investigation into the shooting.

One police source told THE STAR that they are now investigating the allegations that the men are part of a hitman gang.

It is also alleged that the men were hiding out at the Mango Walk location, which they used as a base while carrying out various contract killings.