STAR on the Rise: ‘I’m not here for money or fame’ - Rhythm Piink serious about rising to the top 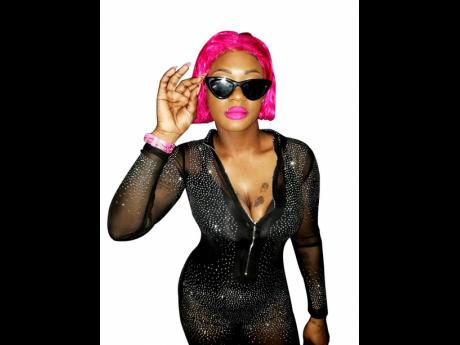 Aspiring artiste Rhythm Piink wants to bring her own style and flavour to dancehall.

Brooklyn-based entertainer Rhythm Piink has big dreams about being a dancehall superstar. She wants to bring a new flavour to the entertainment scene and is confident she can shake things up on both the local and international scenes.

“I see myself going very far in the industry because my experience pool is very big. Not only have I worked with musicians, I’ve worked with dancers and I’ve played many roles. I want to introduce the world to a voice they’ve never heard before, art they’ve never experienced before and a fresh, unique sound,” she said.

Rhythm Piink, whose given name is Tiffany Ashanti Houston, remembers having an interest in music from a very early age. She recalls standing in front of the mirror, with hairbrush in hand, and bellowing out notes. Her interest in entertainment mushroomed, and by age 15, she was singing and dancing.

“When I started in music I was 15 years old. I started with dancing by entering dancehall queen competitions and I started to tour with that. I had big time deejays like Bobby Konders taking me on tour. Then after meeting Major Lazer in 2011, I started to introduce my music,” she told THE STAR.

“This is the one job and the one dream that I wanted. I used to be a musician and my brothers and sisters they did music. My name Rhythm Piink is an ode to music and that shows how much I love it,” the-up-and-coming entertainer said.

Rhythm Piink, whose father is Jamaican, is on a quest to fuse dancehall with hip-hop and rock music.

“I don’t discriminate against any genre,” she said, adding “I want to bring a new style of music, a new sauce, a new flavour and I really believe working together with others is how I will do that.”

Rhythm Piink said that he mother is her biggest supporter but it took hard work to win her over,

“My mother is very strict so she really didn’t like it (me doing music), so I really had to beat my own standards to make it (her acceptance) happen. But after a while she started coming to my shows and now she’s my biggest supporter and that means everything to me,” she said.

“It wasn’t easy in the beginning but she taught me to always put my best foot forward and I did that. Now, I introduce her as my manager and she makes no jokes about my career,” she said.

With a strong support system and a style she believes sets her apart, Rhythm Piink believes she has the formula to go all the way to the top.

“The way the local industry is set up, it is an uphill battle but you just have to keep fighting if it’s what you really want … I’m not here for the money or the fame, I’m here for the love of it and so I’m gonna last a while,” Rhythm Piink said.