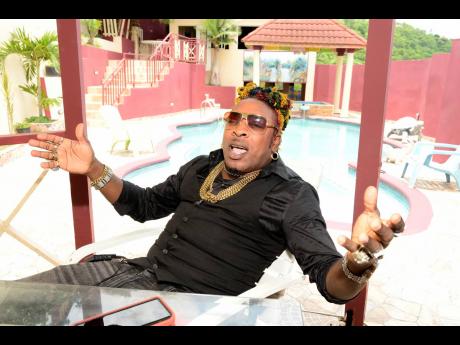 Entertainer Elephant Man has denied suggestions that he failed to inform immigration officials that he was returning from Amsterdam in the Netherlands.

The dancehall artiste is now the subject of an investigation by the Health Ministry after rumours began swirling on social media that he had returned from Europe, an area heavily infested with COVID-19, and has failed to follow measures outlined by the Government to contain the spread of the disease.

“I had to cut my tour short because everywhere a lock dung and this thing is getting serious. Me, O’Neil Bryant, could never out there inna di world and see how serious this thing is and come back and gwaan like me wah take this thing fi joke. Dis a di biggest threat to mankind right now,” Elephant Man said.

The deejay said having been off the island since February, he was unaware of the self-quarantine protocol that was set up, and was not enlightened by immigration authorities upon his return last night.

“The form ask me to state which county I travel to in the last six weeks and me put Amsterdam, Europe, because that was the last show I did last week. When I got to Immigration, the officer ask me to name a few more countries. I told her Berlin and Sweden. She stamp me book and let me through, so I’m shocked now to hear all a dis.”

“Why would I lie when you can look and see say me deh a Berlin, dat a good, good Germany,” he continued. “I was expecting people to be there to take me to home quarantine and when dat never happen, I was looking to get a call or something because I (have been) at home since me come,” he said.

Elephant Man said that he is not known as a lawbreaker, and is upset that a particular voice note is tarnishing his name.

“How me a go gwaan like me wah joke out di thing when me deh inna di world and me see the evil and wickedness weh a gwaan out deh? Me wouldn’t violate things like this and lie on the papers,” he said. “A tour me a come off of and everybody know, everybody see where me bee,” he added.

Responding to a question posed at a press conference on Wednesday, Health Minister Dr Christopher Tufton said he has heard about the issue with the entertainer and has asked for an investigation to take place.

“I would prefer not to comment until that investigation takes place so that I don’t make any errors or accuse anyone of anything,” Tufton said.

In light of the recent developments, Elephant Man says he is inviting the relevant authorities to visit his home and start whatever process they need to as he is as serious about playing his part to contain the spread of the virus.

“Right now me a try get in touch with the ministry because I want to do this home quarantine thing. I want to make sure everybody safe and people see say me O’Neil Bryant nah try bruk the rules, I would never do that,” he said. “Me nuh wah make nobody make it look like me really so dumb and stupid fi have this as a joke and a disrespect the system. We nuh cayliss and nuh run risk wid people life because we wouldn’t want nobody run risk wid ours. We just have a death … from this thing yah today, so this ain’t no joke thing, no game,” he said.