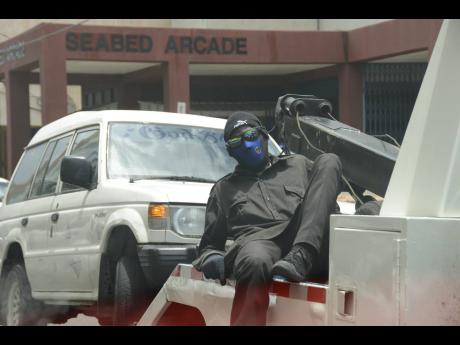 A wrecker driver and his assistant, who are both contracted to the St James Municipal Corporation, and two municipal officers, were attacked by gunmen yesterday as they were towing away a motor vehicle in downtown MoBay.

All four men escaped without being shot, but the wrecker was severely damaged by the bullets.

Reports reaching THE WEEKEND STAR are that shortly after 1 p.m., the municipal officers, along the wrecker driver and his assistant, went to the Pier One car park to address reports of a vehicle that was illegally parked.

The wrecker driver was in the process of towing away the vehicle, when a motor vehicle with three men on board approached.

The occupants of the vehicle brandished handguns and fired several bullets at the municipal workers, who were forced to take cover.

The gunmen then made their escape in the motor car. The police were summoned and upon arrival, an investigation was carried out and a search launched for the gunmen, which proved futile.

Mayor of Montego Bay, Homer Davis, told THE WEEKEND STAR that luckily, no one was injured in the attack, and that he was unable to comment on the matter as it is under investigation by the police.

"All I can safely say is that based on this particular incident, safety precautions will be taken in the future to ensure that incidents such as this does not repeat itself," Davis stated.