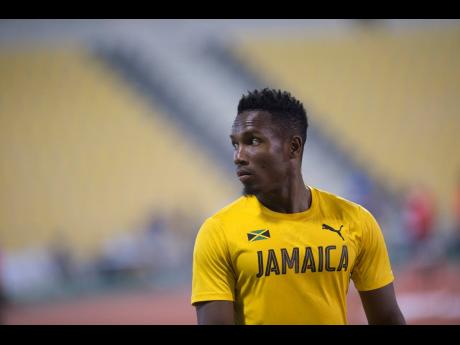 Former national champion Oshane Bailey is taking confidence from his win in the 60m sprint at the Queen's/Grace Jackson Meet on Saturday, as he sets sights on securing a spot on Jamaica's team for this summer's Olympic Games in Tokyo, Japan.

The 30-year-old Bailey, who won the national 100m title in 2010, opened his season in impressive fashion when he captured the men's 60m event in 6.65 seconds at the Queen's/Grace Jackson Meet at the National Stadium on Saturday.

Bailey, who holds a personal best time of 10.11 seconds in the 100m, was a member of Jamaica's 4x100m relay team which failed to make it to the final at last year's World Athletics Championships in Doha, Qatar.

The former Calabar High School standout told STAR Sports that he is happy with his performance on Saturday because this will give him confidence going forward for the season.

"I am feeling pretty good about this win because I have been putting in some hard training this season ahead of the national trials," he said. "I knew that once I came out with them in the first 10m, the race is over, so I am very happy about my performance in the game.

"My main focus is to make the Olympic team and I am focusing on that because I want to secure an individual spot for the 100m event," he said.

Bailey said that he has been putting in work in training this season and he is now hoping that this will pay off for when he gets to the National Trails.

"I have been doing a lot of extra work in order to get much stronger this year and hopefully everything will fall into place for me at the Trials," Bailey said. "I think that with God, anything is possible, so I am just going to leave it all out on the track when the National Trials come up."