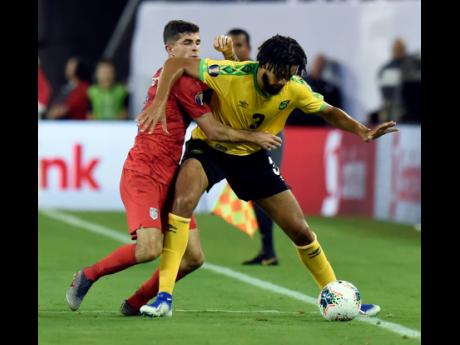 United States midfielder Christian Pulisic and Jamaica defender Michael Hector (right) battle for the ball during the second half of their Concacaf Gold Cup semi-final match in Nashville, Tennessee, on Wednesday, July 3, 2019.

National defender Michael Hector made a winning debut for English League Championships side Fulham in the English FA Cup tournament on Saturday after he helped the club to a 2-1 victory over Premier League side Aston Villa 2-1 in the third round of the competition.

The 27-year-old defender signed in principle with Fulham from London rivals Chelsea for an undisclosed fee last August. However, he was unable to play until the deal became official at the start of the January transfer window, but he has been training with Fulham since his move in August.

Hector welcomed the move from Chelsea after failing to make an appearance for the club since joining from Reading back in 2015.

Hector arrives at Fulham after several spells out on loan away from Chelsea, and now, he will be hoping to help the club's charge back to England's top flight.

He is no stranger to playing in the Championship as he also played there last season for Sheffield Wednesday, where he was named their Player of the Season.

Hector, who has made 30 international appearances since his debut for the Reggae Boyz in 2015, was a member of the squad, which made it to the semi-finals of the Concacaf Gold Cup tournament last summer in the United States, and also the team that went to the 2015 final.