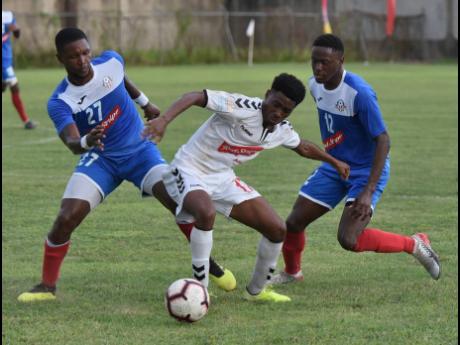 Portmore United stretched their unbeaten run in the Red Stripe Premier League (RSPL) to four matches and jumped three places up the table to fourth after a 2-1 win over UWI at the Prison Oval yesterday.

Cory Burke (12) netted the equaliser for Portmore after Trivante Stewart fired UWI in front in the first minute of the game. Rondee Smith (26) got the winning goal midway the half.

After losing his first three matches as head coach of the defending champion, a lot was said about coach Ricardo Gardner's ability to manage from the sidelines, with some even predicting an early dismissal for the former Reggae Boyz captain.

But, since those losses, Gardner has answered his critics in fine style, with three wins and a draw in his last four.

The former Bolton star says football can be unpredictable, but he believes their hard work is starting to pay off.

"This is football. Things are going to happen but we have made a lot of progress," he told STAR Sports.

"The players have been working hard to fix it and the results are showing. So we just need to continue believing in ourselves and continue to work hard and take each game as it comes," he said.

Gardner believes that they are now creating opportunities and putting them away, but he still believes they need to be more clinical.

"The positive is that we got three points and created a lot of chances. Unfortunately, we didnt put away more of them. But we are creating chances and that's a positive to take away.

"But we need to do some more work in front of goal, so that when it come on to games we can be more clinical," he continued.

"Our projection now is to put our best foot forward every game and try to get as much points as possible."

The game had barely started when Stewart's excellent volley put UWI up.

But a quick response from Burke and another from Smith midway the half put Portmore in front and they held their lead to the end.

The defeat left UWI handing over the relegation zone on goal difference on five points, the same as Vere and Tivoli.