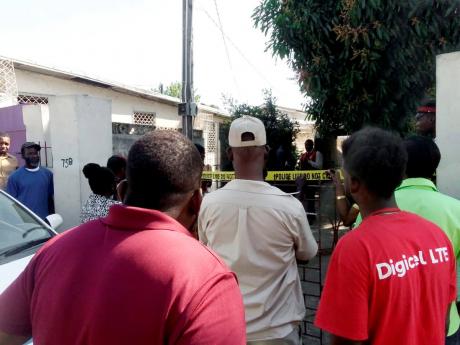 Curious residents gather outside the house where Cecilia Robinson-Lawrence was killed.

Steve Lawrence was in a state of shock as he spoke to our news team yesterday about the murder of his mother, 57-year-old Cecilia Robinson-Lawrence.

Reports from the police are that she was chopped to death, the killer using an axe as his weapon of choice before escaping over a wall.

Robinson-Lawrence was also hit in the head with a pipe. Her daughter, who also received chop wounds, was taken to the hospital. Her condition up to press time was unknown.

Police indicated that Robinson-Lawrence was raped and the house set ablaze. After the blaze was put out, the axe was found wrapped in a cloth.

“It is a really terrible experience. If mi never come in time, mi sista probably would a dead because a school mi deh with mi son and mi likkle bredda call mi and tell mi seh mi need fi come home because him hear seh the house deh pan fire and mi mother get stab up,” Lawrence said.

He quickly got in his car and went home, but nothing prepared him for what he was about to see.

“When mi go inna the house mi see mi sista blood up pan the baby and mi mother full a blood with her hands and foot bound and she never have on no panty,” he said.

According to the police, they received a call around noon. When they responded, they found Robinson-Lawrence dead and her daughter suffering from chop wounds.

Lawrence said that he is devastated as he constantly sees the image of his mother with the burns and cuts on her body.

“The house burn out so mi not even know weh mi a go stay tonight. Mi son come in from school and mi affi a tell them to hold him because mi caa mek him see him grandmother like this,” he said. “So mi father die (from cancer in 2014) and mi mother die. Mi nuh know how mi a go manage because the house bun out and mi nuh know how mi son and smaller bredda a go dweet,” he said.