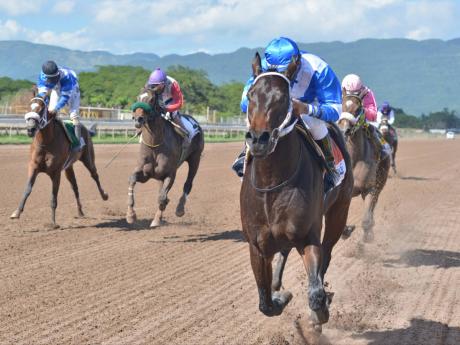 WOW WOW wins the Supreme Venture 2-year-old stakes with Ameth Robles aboard ahead of Tomohawk and Money Monster at Caymanas Park earlier this year.

Veteran trainer Gary Subratie says he is very confident that his talented three-year-old colt WOW WOW will brush aside the challenge of MAHOGANY in tomorrow's Jamaica St Leger at Caymanas Park.

The Leger, which is the second leg of the Triple Crown, will be run over 10 furlongs. It will see the country's best three-year-old horses vying for purse money of $3 million.

WOW WOW, ridden by jockey Robert Halladeen, defeated the MAHOGANY by three lengths in impressive fashion to win the 2000 Guineas over eight furlongs in their last meeting.

However, former champion jockey Omar Walker has replaced Dane Dawkins aboard MAHOGANY, and so a more exciting encounter is expected between both horses.

"You have to come and watch this race because WOW WOW is the crowd favourite, and so let's hope we can put MAHOGANY to dust," said Subratie.

"He (WOW WOW) has trained very well and everything I asked of him in the exercise he gave me, and so I am really pleased with his work," he said.

WOW WOW was beaten by the country's top-rated horse TOONA CILIATA by five lengths in his last race over nine furlongs and 29 yards. Subratie underscored that his horse has gained a lot of experience from that run, and so he is expecting a pulsating performance from his horse tomorrow.

"I ran him about four weeks ago just to give a little experience around the turn against TOONA CILIATA and got beaten, but that is fine because he learnt a lot from that, and so I know he is going to do a lot better in this race," he said.

Subratie has saddled three other horses in the St Leger. They are the fast-improving NIPSTER with Linton Steadman aboard, and ANOTHER AFFAIR with Jerome Ennis in the saddle. Subratie's other runner, OLDE WHARF, will be ridden by champion jockey Christopher Mamdeen.

"It is not going to be run over anybody and so it is going to be a nice race. I think NIPSTER ran a brilliant race the last time and he is improving and he is learning to relax, and I think that is the key with him," Subratie said.

"The horse that is dangerous in the race is ANOTHER AFFAIR, and so that is the horse that you can't take lightly."