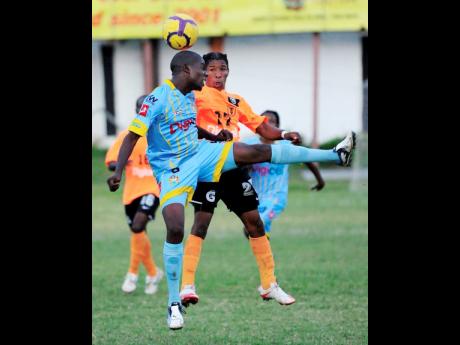 In this file photo from December 2010, Kenardo Forbes (left), then of Waterhouse FC, contests a header with Tivoli Gardens’ Shawn McKoy during their Premier League match at the Edward Seaga Sports Complex.

Former Waterhouse midfielder Kenardo Forbes is now the all-time assist leader in the United Soccer League (USL) in the United States, after helping the Pittsburgh Riverhounds to a 4-0 win over Philadelphia Union II last Saturday.

Forbes, 32 years old, provided two assists in the first half the game to record his 38th assist in his sixth season in the USL.

His total surpasses the previous record which was held by Maikel Chang, who recorded 37 assists with the Charleston Battery and Real Monarchs.

Forbes recorded that tying assist when he crossed the ball inside the 18-yard box for Steevan Dos Santos to finish from close range. He then broke the record when he assisted on a corner kick for Thomas Vancaeyezeele to score the header.

Forbes' two assists have helped the Riverhounds to remain unbeaten in the season in Group F. It was also Forbes' seventh assist in seven games this season.

Forbes, who has three caps for the Reggae Boyz, has established himself as one of the best players over the years in the USL. In 2015, he led the Rochester Rhinos to the USL title. However, after spending three seasons with the Rhinos, Forbes then joined the Riverhounds in 2018.

Forbes, who has scored eight goals in 64 games for the Riverhounds, was a second-team all-league pick in 2018.

However, he was a first-team all-league pick and Major League Soccer finalist in 2019.