Blake changes his mind about 200m 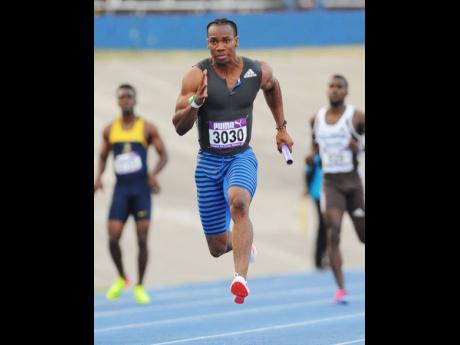 Jamaica's star athlete Yohan Blake says has had a change of heart about the 200m.

The 2011 World 100m champion said that he would quit the half lap event after he finished a disappointing fifth place in the 100m at the World Athletics Championships in Doha last year in order to better concentrate on the shorter sprint event.

But the former St Jago athlete has reneged on that stance as he told STAR Sports after his first race of the season that he will be contesting the sprint double at the National Senior Championships in June this year as his new coach Gregory Little believes it will benefit him.

"Gregory Little has formulated a plan for me and it has been working perfectly going to over distance and getting back my 200m means that I will be getting back to 9.8 and 9.7 which I know I can," said Blake, who was opened his season at the Camperdown Classic with 48.24 seconds in the 400m last Saturday at the National Stadium.

"(I) am talented and I see where I am improving in training and also in the 400m today and so definitely, I probably looking for both events," he said.

"The first time I ran 19.26 Gregory was the one out there working with me the day before I ran that second fastest time in the world and so I have experienced working with and he knows what he is doing and he is very educated in the sport," Blake said.

Blake failed to make the final of the 200m at the Doha World Championship after placing sixth in the semi-final in 20.37 seconds, a time that is more than a second slower than his personal best of 19.26 seconds.

The 30-year-old personal best is only bettered by Usain Bolt's world record time 19.19 seconds. His 9.69 seconds is the joint second fastest time in history behind Bolt's 9.58 seconds. He noted that after last year's big disappointment in Doha, he is now a lot more mature and focus this season.

"Last year for me, I did bad because I ran in the semi-finals in Doha poorly and that cost me a better lane in the final, which cost me a meand he will be contesting the sprint double at this year's