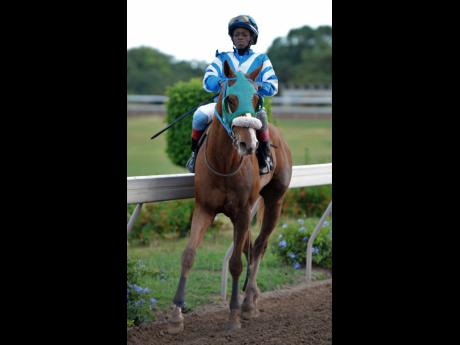 Samantha Fletcher aboard One So True.

Sidelined apprentice jockey Samantha Fletcher says her recent rib injury has had a devastating effect on her career because she has been sitting at home and unable to earn money from her profession.

The 27-year-old Fletcher, picked up the injury after she was kicked in the side by a young horse during an early-morning workout on December 26 at Caymans Park.

She was diagnosed with a fractured rib which is expected to keep her out of action for at least five months.

"It has been really stressful right now because I have been sitting around when I could have been riding and winning races, and also earning some money to take care of my bills," Fletcher said.

"This is something that I wasn't really looking at, so it is really hampering me right now. I could have been a lot further in my career, but now I am back to square one.

"But I can't put that on my head. I just have to just try and get better because if I should force now, then the injury is going to get a lot worse and I don't want that to happen."

Fletcher, who began riding competitively in September 2018, has jockeyed 10 winners so far in her young career. She says that the doctors have advised her to stay away from racing and not to lift any weights.