Another Bullet a cinch in Sprint 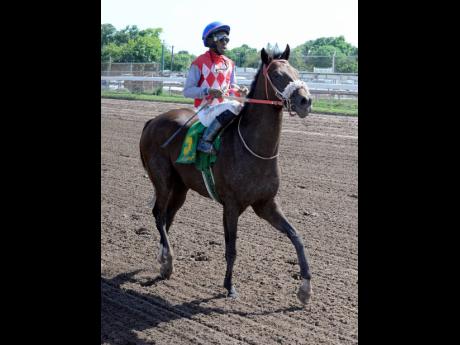 WATCH out for a classic case of a collapsing pace, which should benefit the class horse, seven-year-old ANOTHER BULLET, in Saturday's Caribbean Sprint.

Trainer Patrick Lynch couldn't have asked for a better draw, widest of 13 rivals, from where experienced Shane Ellis will have a bird's eye view as the speedsters, and there are many of them, to go at each other's throats for the first two to three furlongs before the real race starts.

Having spent his last three races prepping for the sprint, brave efforts against Sunday's Superstakes favourite, SHE'S A MANEATER, ANOTHER BULLET is basically facing horses stepping up in class to grade one, bar MONEY MAGNET, who he has had behind him in three consecutive meetings since she returned from a two-month lay-up in April.

A condition race, the Caribbean Sprint has long favoured genuine grade-one horses, who spend all year competing at the level, only to sit level, or a few pounds heavier, than lesser rivals stepping up in class, who, on any other given raceday, would have been possibly lighter two groups lower.

Another plus for ANOTHER BULLET is the number of runners, who have either recently returned off lay-ups, or just rediscovering form, now thrown in at the deep end going six furlongs. Among the lot are PEKING CRUZ, MR UNIVERSE and, to a lesser extent, RAS EMANUEL, all having last raced among overnight allowance runners, two groups below grade one.

Out-of-shape CHACE THE GREAT's grade-one status has been trampled over in his last two races by the likes of ZEPHYR and EXHILARATE in open allowance races, finishing fourth and seemingly a shadow of the horse who clocked 1:11.0 to beat MR UNIVERSE and PEKING CRUZ in last year's sprint.

In his last good race, April's Lady Geeta Trophy, in which he ran SHE'S A MANEATER and WILL IN CHARGE off their legs, it was ANOTHER BULLET, who came storming to pick up the pieces, winning by three-quarter length in 1:11.4, partnered by apprentice Reyan Lewis.

The lone three-year-old in the sprint, GOD OF LOVE, has run some impressive times but in questionable circumstances against horses who might not have been at their best, including 59.3 to beat RUN THATCHER RUN at five furlongs round on August 10.

In what will be a scorching pace involving MR UNIVERSE, PEKING CRUZ, CHACE THE GREAT, EXHILARATE and ANOTHER VIGOROUS, GOD OF LOVE is bound to be in problems carrying 121lb in a pace he has never faced before.

If there is a horse to upend consistent ANOTHER BULLET, Rowan Mathie's ANOTHER VIGOROUS seems an ideal candidate, even though his consistency is spotty. The pair has some history, the back end of last season and January, exchanging victories in the Gladiator Trophy and St Catherine Cup, respectively.

It should be noted, though, that when ANOTHER VIGOROUS had beaten ANOTHER BULLET in December's seven-furlong Gladiator Trophy, sitting almost level, it was three-time champion jockey Dane Nelson against Daniel Satchell, three months out of jockeys' school. In January, it was Simon Husbands with 126lb when the tables were turned.