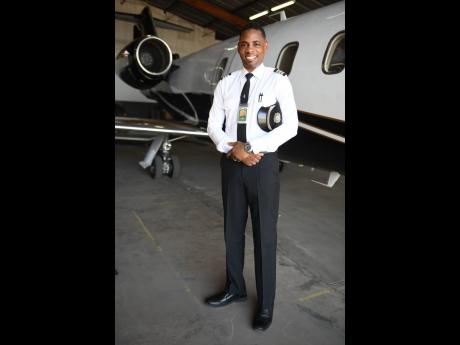 When he was seven, Major Carlington John Reid visited the Jamaica Defence Force (JDF) Air Wing show, and knew he had to become a pilot.

Fascinated with the helicopter's propellers and the whirring sound it makes, he saw himself making a career in aviation. Today, almost three decades later, Reid, is a commercial pilot with Caribbean Airlines. Decked suavely in his pilot uniform, he speaks in front of a parked jet at the Tinson Pen Aerodrome. He said he takes great pride wearing his full uniform, as it ensures his decorum is of a high standard, striving to be the ideal representation of fellow aviators.

Immediately after completing his sixth form studies at Wolmer's Boys' School, he enrolled in basic military training at the JDF's Newcastle training facility. In his 20 years in the Air Wing, he served as commanding officer, instructor and student instructor pilot.

Due to his knowledge gained at the Royal Military Academy Sandhurst in the United Kingdom and Portage la Prairie, Manitoba, Canada, and achieving his main goal of becoming a commandant at the Caribbean Military Aviation School, he felt it was time to spread his wings. In 2015, he ventured to Caribbean Airlines.

"I thoroughly enjoyed my time at JDF, it was priceless. The lessons that I learnt, not just through flying but leadership, communication, were invaluable lessons. (But) I always wanted to experience commercial aviation pilot life," he said. Reid grinned widely when he pointed out that he is one of few persons trained as a fixed wing commercial pilot and rotary pilot. This means he is trained to fly helicopters and planes.

He reflected on his first commercial flight, November, 5, 2015, departing Kingston to Toronto. He shared how nervous he was, trying to remember all the switches and controls in the cockpit. "I was trying to regurgitate all the information I had learnt in training, applying it practically to what I was doing. But I realised that a lot of flying took experience, so even with the knowledge of what you're supposed to do, getting into the cockpit, you get into that routine, you will reach the milestones you want," the father of one said.

While the COVID-19 pandemic had threatened air travel for several months, Reid is thankful he has retained his job despite having to take a pay cut.

He explained that he enjoys the service he provides in ensuring that travellers arrive safely and still has a desire to improve his ability as a pilot. There are some common misconceptions associated with pilots that Reid also wanted to dispel.

"Persons believe the pilot just turn on the engine, change it to autopilot, enjoy their meals and when they land go straight to airport. That couldn't be further from the truth. Our job is a constant study, keeping aware of the changes in the industry and it is certainly far from the truth to think that pilots are relaxed," he explained.

As for his future plans, he has no intention of being grounded anytime soon.

"If I am able to continue flying, if the current situation permits and if my health permits, I have no desire to stop flying," he smiled.