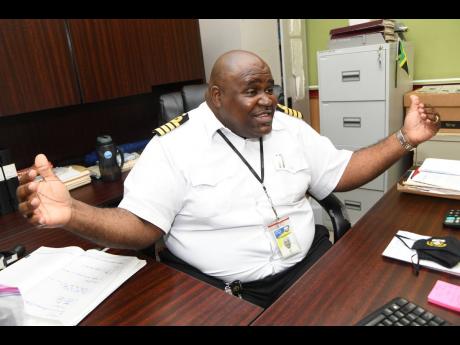 Damean Beckford in his office at the Jamaica Customs Agency in Kingston.

Managing the team that oversees the importation of all goods into Jamaica seems like an extremely daunting task, but 41-year-old Damean Beckford handles it seamlessly.

Beckford manages the entry processing unit at the Jamaica Customs Agency (JCA). The unit processes all import declarations, including calculating the charges where necessary.

But before he was hired 17 years ago, Beckford was preparing to do a degree in production and operations management, having already achieved an associate degree. However, that area of study was not offered in Jamaica at the time and overseas studies were too expensive for the Portmore resident.

"One summer I was at home after I left my call centre job and a friend of mine got a summer job here (at JCA). He called me, knowing I was unemployed, and said, 'Customs taking on some people, enuh. Do an application and let me drop it off for you'. Of course, I sent it in and as God would have it, I got the job," he told THE STAR.

Beckford admitted he knew nothing of the agency's operations other than interacting with customs officers at the airport or collecting a barrel at the wharves. But, undaunted, he started on September 23, 2003, as a customs officer and has worked his way up the ladder.

He said his job gets a bit more active during the Yuletide season, as there is an uptick in importations.

"The calls triple and sometimes the demands that are placed on my officers become a whole lot more. On a regular day we would have upwards of 3,000 to 4,000 declarations being submitted to customs. And on a regular Christmas season, we have upward of 4,000 to 5,000 declarations. With 'COVID-19 Christmas', we're seeing between 4,000 and 4,500 declarations," Beckford said. He admits that some days, the stress level is high.

"But which job isn't stressing? It goes back to what is your passion and what gives you the 'kick' so to speak, and for me, though there is the increased demand from time to time and members of the public who may bash you, you will realise the function you are performing is for the greater good, not only on behalf of the JCA but the government of Jamaica," he smiled.

The Wolmer's Boys' School alumnus finds humour in the common misconceptions people have about the work of customs officers.

"In terms of the taxes and duties that would be levied on items, the JCA does not set the rates, the government does and we enforce the collection of these rates. None of this goes into our pockets. It goes into the consolidated fund at the end of each day and we have to balance it and we have to account for it," he said.

Decked in his white shirt with black and gold epaulettes, he explained the uniform gives him a sense of pride, representing the people of Jamaica knowing he is providing honourable service.