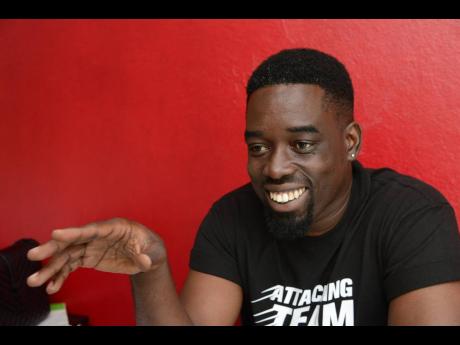 A portrait of Andre 'Burns' Burnett, adorned with flowers, rested on an easel inside the Munro College auditorium on Saturday, a gentle yet forceful reminder of the beaming visionary and 'crazy creative' that Burnett was.

Family and friends gathered at the venue for the hour-and-a-half-long memorial service, while countless others tuned on online to pay tribute to Burnett, who died after being swept away by strong currents at Treasure Beach, St Elizabeth, in October.

His cousin, Nigel Austin, eulogised him as a spiritual being, one who strived for perfection and excellence. He was moved to tears when he shared one of Burnett's favourite quote from the movie Madmen. "Change is neither bad nor good, it simple is, which means we just have to accept changes as they come," Austin said, in-between tears.

The valedictorian in Munro College's graduating class of 2004, Burnett, 35, who was born in Mount Pleasant, was regarded as a marketing genius.

Kavel Francis, business associate at Burnett's company, Muse 360, noted that he was the mastermind behind the notable Campari Caribbean's 'PopStyle' series and many other advertising campaigns in the island.

"Our company culture was a culture of nurture and growing everyone; testing their limits and increasing their strengths. That was the nature of our boss," said Francis.

Burnett's friend, Adrian Beedle, spoke of his impact on their group of friends, the Attacking Team. "He pushed us to think beyond everything we thought we knew. He taught us to live immediately, (and) without hesitation he made us grow up. We are all better people because we knew him," Beedle said.

Beedle remembered Burnett as one who respected women, even forming his own 'Auntie Network' as a means of honoring the women in his life.

"The Auntie Network is the group of women who, alongside his mother, helped to raise him. From a young age, 'Dre' had the privilege of seeing women save the world every day, [and] armed with the knowledge that women could save us all, he strategically employed and worked alongside mostly women."

There were moments of laughter during the memorial service when Burnett's childhood best friend, Damion Myers, spoke of the moment both men revealed their wives were pregnant, ironically at the same time.

Myers said both Burnett and himself were noted as doing things together, having attended Balaclava Basic and Munro College, so it came as no surprise to friends that their wives were pregnant at the same time.

"Little did they know it wasn't a planned affair, it was just a coincidence; and like many moments in our lives that we shared without planning, it was connected in many ways," he said.