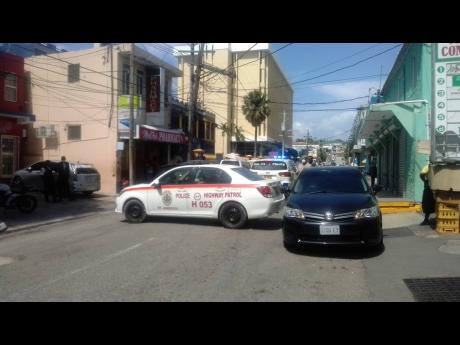 The crime scene in Montego Bay yesterday where robbers shot a security guard.

A security guard who was shot and injured during a daring daylight robbery at a Chinese-operated supermarket in downtown Montego Bay, on Thursday, is now battling for life at the Cornwall Regional Hospital.

The guard, who hails from Farm Pen, Llandilo, Westmoreland, underwent surgery and is now in the intensive care unit.

Reports by the Barnett Street police are that shortly after 12:30 p.m. yesterday, two men wearing masks entered the supermarket and held one of the operators at gunpoint.

They then demanded money, but before the operator could comply, the security intervened and he and one of the gunmen got involved in a tussle. The guard was shot multiple times.

The men then ran from the supermarket and escaped in the direction of King Street.

Too shaken to speak

The supermarket's operators were too shaken to speak with THE WEEKEND STAR, so it is still unclear if the robbers managed to escape with any cash.

He said that after the robbers escaped, persons rushed the security guard to hospital.

They were robbed of millions of dollars in broad daylight, as they pulled up outside a bank, which is located on a neighbouring street to where Thursday's incident took place.