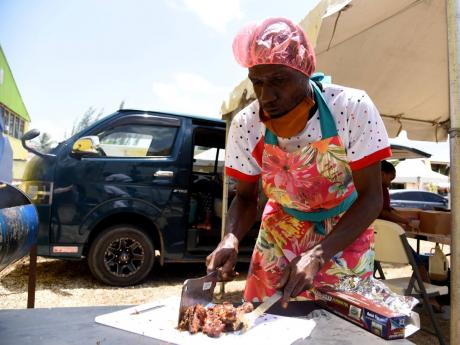 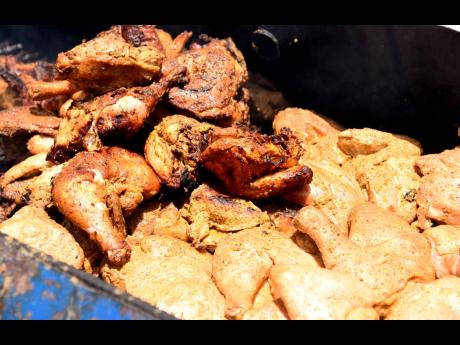 This curried jerked chicken was a big hit at a farmers’ market that was held at Denbigh in Clarendon last Friday.
1
2

Jerked chicken is a favourite among Jamaicans, but have you heard of curried jerked chicken? Lascelles Davis of Colonel's Ridge in Clarendon has been raising brows across the central parish with the introduction of his unconventional jerked chicken.

When THE STAR caught up with Davis at the Farmers' Market and Business Fair ,held on the grounds of the Denbigh Agricultural Showground on Friday, he was flocked by curious buyers, eager to try the unusual delight. "Curry jerk?" questioned a curious patron, but Davis said consumers had been coming in their numbers at the event, more than he had bargained for.

"This is a healthier jerk ... better than the black jerk, because sometimes they use beer and so on the chicken. More people are gravitating to the curry jerk because it has more flavour. A woman told me she used it on egg and is the best egg she ever eat," he joked.

Davis told T HE STAR that he has been doing curry jerk since January, but his liquid curry was launched in 2001. "This is all-natural 'cause it's natural turmeric, and this is going to go far." Citing the response to his curry jerk as great, he said. "Everybody want this, even people from overseas. People from all over love it, I just need some investors now to take it further."

Davis, the father of 19 boys, said the idea to produce the liquid seasoning stemmed from a desire to make life easier for cooks, adding, "I made the liquid curry with especially housewives in mind. You just pour it, rub on you meat and you good ... very nice."