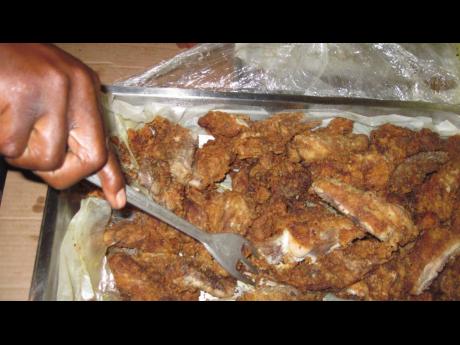 Disgruntled residents across western Jamaica have vented their anger over the recent hike in the price of chicken back.

They told THE STAR that since the coronavirus came to Jamaica in March, the price of chicken back has jumped from $100 per pound, to as high as $200 per pound.

They believe this is a cold-hearted act on the part of the supermarket and shop owners.

"A how dem expect wi fi live? None a wi caa buy vegetables again because even lettuce raise from $300 a pound to $900 and $1,000 a pound. And now di likkle chicken back wah wi a depend pon fi feed wi pickney dem, a it dem a raise up now," one Montego Bay housewife, who gave her name as Lorna, told THE STAR. She and others were complaining outside a meat shop about the high price.

"Chicken back a di likkle common meat what we as poor people depend pon. Wi caa buy steak, an big chicken, an mutton like a some people. So wi haffe stick to wi chicken back. But all a wi weh yuh si stan up yah suh a vex wi vex after the people dem inna di meat shop a tell wi bout chicken back raise," she said.

Neville Barrett, a popular pan chicken vendor from Lucea in Hanover, said the Consumer Affairs Commission and other government bodies need to step in and assist the poorer class of Jamaicans.

"Since COVID-19 come een, things get very bad fi mi especially because chicken get scarce every weh, and wen yuh do get it, the price high just like a fish or mutton," Barrett said. "Since the prime minister move the curfew time up to 10 o'clock, mi start do back some jerking, and pon fi mi little spot, jerk chicken back is one a di thing wha sell the most. A don't know if a tru the people dem si seh it a sell, but dem raise the price a di chicken back gone sky high, nutten no cheap again."

One soup vendor in Montego Bay said that he uses chicken back to 'pep up' his soup.

"Right now mi can barely buy it. A chicken back and ackee a fi wi national dish, an wen dem a raise it so high that we as poor people can no longer buy it, a mash dem a mash up di society," the vendor stated.