Mom tries to save son with stage four cancer 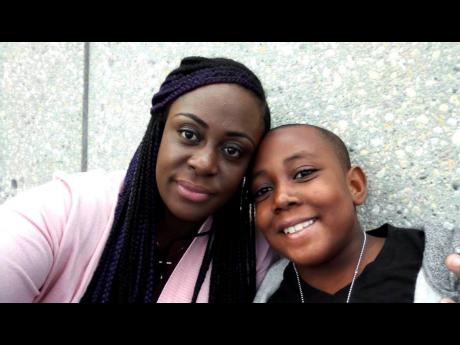 While looking through some photos of a family trip, Vanessa Williams, 31, realised that her son's head was not 'straight'.

Tests done at the University Hospital of the West Indies (UHWI) revealed that eight-year-old Roje Josephs had stage four Hodgkin's lymphoma, which is a cancer of the lymphatic system, that affects the immune system.

"At first, when I heard, I was in shock. When I met with the doctor and she gave me the news, I did not know how to process it," she said. "That night, I remember going into the bathroom closing the door and crying. I cried so much that it felt like I was tasting blood. I started to get angry at God. I was like how could you do this to me? Mi just get baptise and you throw this in my face."

According to Williams, her house has to remain sterile in order to protect Roje.

"If people come and look for him, they have to put on gloves and masks. Even when he is in the hospital, they have to isolate him on a private ward because he is susceptible to anything," she said. "He is supposed to return to the hospital on the seventh (of February) to continue his treatment."

The mother of two said that Roje's illness has been really hard on the family. She said he has done three surgeries with one more to come. Plus he has two more rounds of chemotherapy.

"I am at a point where I have 13 cents in my account. Mi borrow loan from banks. All a my savings dwindle out completely in such a short space a time. It's like my entire world just crash," she said, adding that some days, she has to choose between food for her children and medication for her son.

Williams said that she has spent more than J$3.5 million on Roje's hospital bills and medication. She told THE WEEKEND STAR that her light and water were recently cut off because of lack of payment.

In addition to financial help, she emphasised that emotional help was also essential.

"There was a time when he looked at me and said 'mommy, mi give up. Mi can't do this anymore. Mi a go sleep and nah go wake up and yuh nuffi cry'. I reached out to one of my friends who had cancer in high school and she spoke to him and that changed his mindset," she cried.

Anyone who is willing to help Vanessa Williams save her son's life can call her 876-279-3742 or donate to her Old Harbour Scotiabank account 420582.