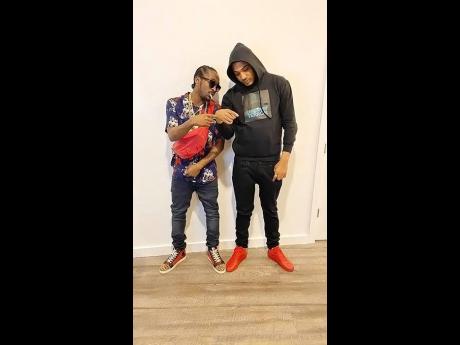 Having gained some traction from a recent collaboration with dancehall artiste Blak Ryno, up-and-coming producer Shawn Dyer is looking to cement himself in the dancehall industry.

In an interview with THE STAR, Dyer said the track Murderous is on his Terror rhythm, which was produced by his and Ryno's joint label, Unknown Garrison System.

According to him, the song created such a buzz, the rhythm is beginning to also cause quite a stir.

"People are loving it so far. It's been getting a lot of airplay on the radio in Florida since it was released last month, and I'm looking forward to it achieving high streaming numbers. This riddim is going to cement my introduction into the music industry," he said. "Ryno's song is also getting a lot of love.

It's almost at 100,000 views on YouTube and has been actually one of the best projects he released for the past couple of years. It's a good look for both of us."

Revealing that he and Ryno's relationship dates back to when they were teenagers, the producer said he is happy they have both come to a place in their careers where they can help each other out.

He pointed out that over the years, Ryno has not been getting the respect he deserves in dancehall and so he wanted to do something that would help change that.

"We both loved music. He became an artiste and I ventured into producing. After years of not getting the recognition he deserved from the entertainment industry, he and I decided to start our own label. We recently reunited in the States and came up with this riddim and his Murderous track. Both of us are overwhelmed that we can help push each other's careers. He is a very talented man, and so am I. Together, I think we can make a really big impact on the music scene," said Dyer.

Dyer said the Terror rhythm was inspired by the changes that have been happening in dancehall music. He says the music is taking on a more Afrobeat, dancehall-trap vibe, and he's looking forward to exploring the new sound a lot more.

"The new way of dancehall, if yuh focus pan the beats dem, is just different vibes, different flows ,and so that's where my inspiration for this riddim came from. It's mostly like an Afro and a dancehall-trap beat. The changes, the new flows in dancehall, is something I have always wanted to explore," he said.