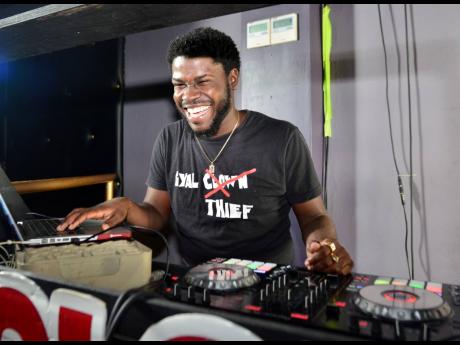 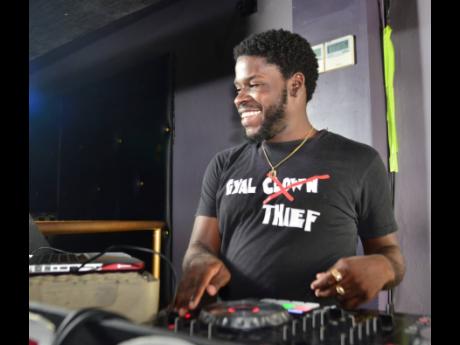 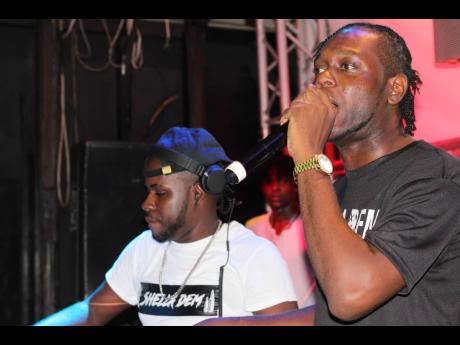 DJ Shella (left) and DJ Spugy get loud on stage. 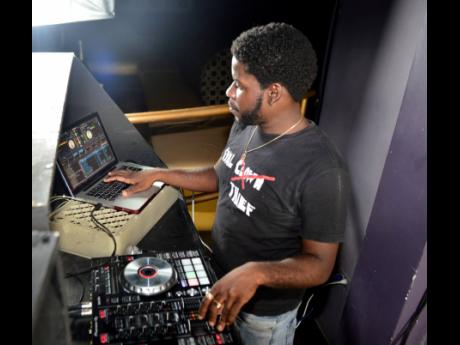 In 2013, Donroy Richards marked his target and took a shot in the 'Digicel Showdown' High School DJ competition, representing Kingston College. The projection and clarity of his voice was the secret weapon of the then third-former, and from then he has never been far from the action, firing shots with his versatility.

"The community is flooded with a lot of creative disc jocks - young and established, (so) when an opportunity arises, whether a competition or party, all an individual has to do is make use of it and play like it's the last time a console will be in front of you." This is DJ Shella's perspective.

He placed second in the competition, setting the foundation first as an MC, until he transitioned to playing music in high school.

"In 2016, at the start of my college education, a lot of doors opened for me as an MC and disc jockey. While at a party, I had to take charge of the turntables and microphone for another selector known as DJ Romeo, and there were more occasions when I had to cross over into mixing, enabling me to master my craft, because truth is, I was not a sharpshooter as I am now. It definitely took a lot of practice, but the hard work has paid off," DJ Shella shared.

Rough-edged yet focused on making it big on the scene, DJ Shella said that he is not against taking notes from his seniors.

"From the earlier part of my career I was fortunate to be around solid examples, disc jocks from Coppershot Sound, and later, Renaissance Disco with DJ Romeo, and we would usually observe the tactics of the veterans. I have been grateful for the advice and instructions given to me."

He also salutes his current 'partner in selector crimes, DJ Spugy', who often plays the role of an MC as he goes about injecting life in the parties.

No matter how versed at mixing and emceeing, he said, "It can still be time-consuming to work alone, and it is always good to have someone by your side."

The 22-year-old soon became one of the 'genna-gennas' on the Strike Force team, headed by dancehall dynamo Govana, and he has played for other hitmakers, like Chi Ching Ching.

"As Govana's official disc jock, my responsibilities are to assist with smoother transitions into his set, reading the audience, and developing tactics that contribute to his never-failing sets."

Never afraid to fire shots and drop musical bombs, DJ Shella sometimes stirs up controversy around a console; something he says he picked up from watching old videos of sound clashes and listening to live audios of disc jockeys at events.

"What makes me the 'life of the party' is being a risk-taker," said DJ Shella, who brags about possessing "an unconventional mixing style".