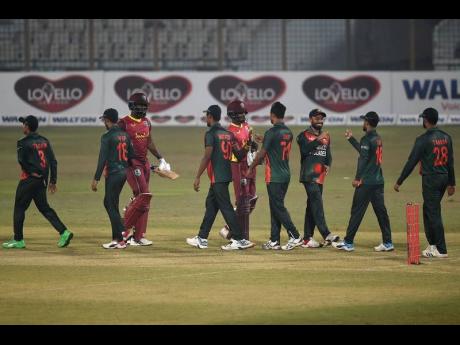 Bangladesh’s players celebrate after wrapping up their third win in the three match One Day International series yesterday.

West Indies captain Jason Mohammed hinted that his team were out of their depth against a well-oiled and resolute Bangladesh team, following their 120-run loss in the third and final One Day International in Chattogram.

The West Indies bowling unit was able to restrict the host for under 300 as they posted 297 for six in their 50 overs.

Pacer Alzarri Joseph reached a personal milestone of 50 ODI wickets, as he claimed two for 48 in his 10 overs while Raymon Reifer also snared two scalps against a trio of 64's from captain Tamim Iqbal, Mushfiqur Rahim and Mahmudullah.

It was the same old story for the visitors when they batted, as they struggled to get anywhere near the total. It was a slight improvement, however, from the previous two games as they were dismissed for 177 in 44.2 overs.

It was the third straight game the regional side failed to bat the allotted 50 overs, as only Rovman Powell with a fighting 47 and Nkrumah Bonner with 31 showed any real resistance.

Reifer chipped in with 27 before he was the final wicket to fall as the Bangladesh seamers did the business this time around with three wickets from Mohammad Saiffudin and two from Mustafizur Rahman.

Following the three-nil whitewash, losing captain Jason Mohammed said the team was a bit far away in all three games.

"The bowling did okay, maybe they got 30 runs too many. The batting didn't work at all. Playing the spinners were really challenging for us, especially in the first two games. It is something that can be rectified with our full-strength batting line up. Once everyone is back, we're going to do better at putting runs on the board," said Mohammed.

The stand-in captain who was commended by head coach Phil Simmons and the Trinidadian was pleased with some of the individual performances throughout the series.

"There are some positives as I believe Alzarri did well, he might not have gotten the wickets but he did well at the top and the death. Akeal Hosein in his debut tour also did well and the future looks bright for him."

The West Indies next ODI assignment will be in March.