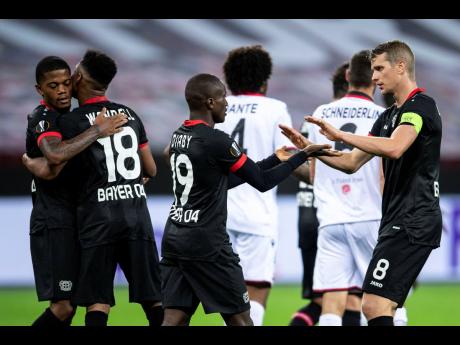 Leverkusen’s Leon Bailey, Wendel, goalscorer Moussa Diaby and Lars Bender (from left) cheer after the goal for the 3:1 during the Europa League Group C match between Bayer Leverkusen and OGC Nice in Leverkusen, Germany, yesterday.

Jamaican Leon Bailey made use of one of his rare starts for Bayer Leverkusen, as his inspirational performance led the German side to a 6-2 hammering of French side Nice to open their UEFA Europa League campaign.

Bailey had two assists on the night as Peter Bosz's men dominated proceedings over Patrick Viera's side on a goal-filled night at the Bayer Arena.

The national attacking player and his Leverkusen side came out flying against their French opposition in the pouring rain, with Amiri taking just 11 minutes to find the opener as he slotted the ball home, having latched on to Bailey's inch-perfect through ball.

The wily winger, who played all 90 minutes, would then add his second assist of the night seven minutes from time when Karim Bellarabi notched his brace following a low deflected shot past Walter Benitez in the Nice goal.

Other Leverkusen goalscorers on the night were Lucas Alario, Moussa Diaby and Florian Wirtz.

The win secures all three points and goes top of Group C for Leverkusen after one game. In another Group 'C' contest, Hapoel Be'er Sheva beat Slavia Prague 3-1.

Bailey took to Instagram following the game and wrote "Got what we came for, 3 points", hashtag assist followed by another post that said, "All the Way Up".