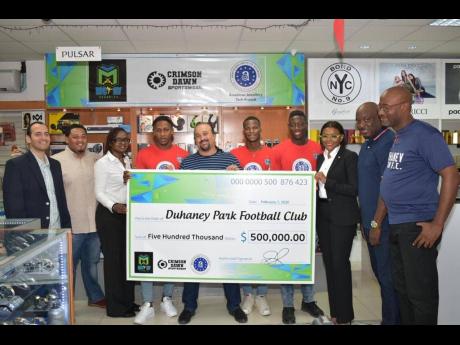 "We want to thank everyone who got behind the wheel because, at Duhaney Park, we are passionate about football and the youth," said a grateful Ferguson, pointing out that the club maintains five squads of 30 players each, most of whom are residents of the area and hone their skills through the respective age-group teams at Baldwin Crescent.

Raj Khemlani of American Jewellery Company said there could be no better way than a football sponsorship, "The people's sport", to launch his firm's new Tech Branch, which offers what he termed as "deals" such as credit arrangements to fit the pockets of all demographics, especially tech-savvy youngsters.

"What better way is there to invest in the next generation than football, while showcasing the affordability of our tech products," he said.

Meanwhile, Todd Rhoden of Crimson Dawn said his firm, which was built by teams such as Duhaney Park and others, was pleased to join American Jewellery Company and McKay Security in the sponsorship.

"We're glad to be able to give assistance to a club with such a strong history. It's the foundation that we're coming from, the youth, operating for more than 45 years in Jamaica, Rhoden pointed out.

We want to do our part to ensure sports is developed in Jamaica."

McKay Security's chief executive officer, Jason McKay, pointed out that Duhaney Park is one of two football clubs that his firm has taken an interest in, the other being New Raiders of the St Catherine Football Association.

"The idea is not only to identify teams with potential but those that are playing unifying roles in their respective communities," he said.