One robber killed in supermarket heist 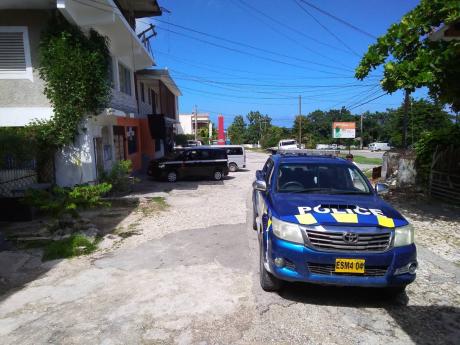 A police service vehicle outside of Country’s Supermarket in Hopewell, Hanover, where two of five gunmen who held up and robbed the establishment on Saturday, were shot.

An unidentified robber was shot and killed, and another shot and injured, after they were challenged by a plain clothes policeman and a licensed firearm holder during a robbery at a supermarket in Hopewell, Hanover, last Saturday.

A customer was also shot and injured by the gunmen, and is presently in hospital in serious but stable condition. The injured robber is reportedly in critical condition under police guard.

Reports are that shortly after 6:45 p.m., the operators of Country's Supermarket were closing up for the day when five men travelling in a Toyota motor car drove up.

They then jumped out of the vehicle and held a group of persons who were sitting outside the supermarket at gunpoint.

The gunmen then ordered a male employee to open the grille. They then forced their way inside the establishment. The cop and the licensed firearm holder were among the few shoppers still inside. Three of the gunmen stood on the outside, while the other two physically abused some of the customers, and proceeded to rob the cashiers of an undetermined sum of cash.

They were then challenged by the cop and firearm holder. A heated gun battle ensued.

The gunmen attempted to run from the supermarket with a bag containing the stolen loot, when they were shot multiple times.

They managed to escape in the waiting motor car. The Sandy Bay police were summoned and upon arrival, the wounded customer was rushed to hospital.

It is also reported that the gunmen drove to the Noel Holmes Hospital in Lucea, where they dumped their wounded cronies outside the hospital gate, before speeding off.