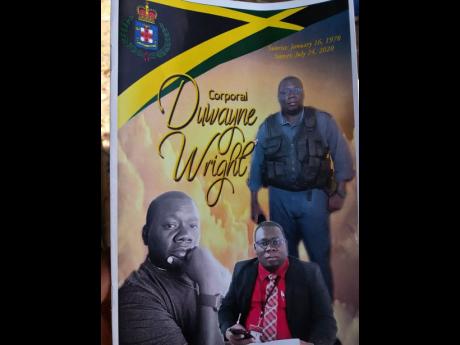 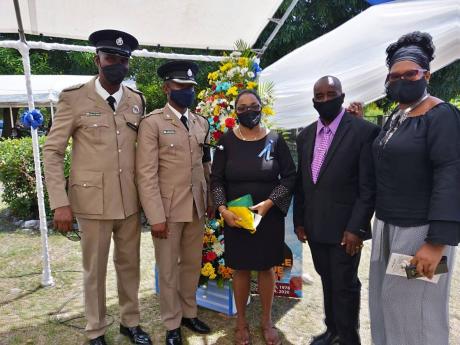 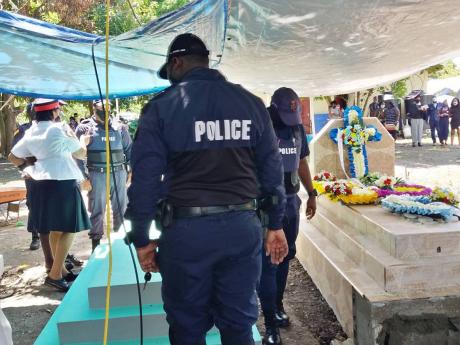 The blue and white decor, drapes, and beautiful flowers did little to lift the sombre mood of the family home of Corporal Duwayne Wright in Bullards Content in York Town, Clarendon.

Mask-donning mourners gathered last Saturday to pay final respects to the man who had served the Jamaica Constabulary Force (JCF) for 24 years.

Wright died suddenly on Friday, July 24, while on duty. His widow, Kemoy, was a picture of sadness.

"I have lost my friend and my companion for 13 years. I don't see a future beyond him. It has always been the two of us, so it's hard for me to even think about where to go from here. I feel numb today ... there is just a void," she said.

The Wrights would have celebrated 10 years of marriage on August 6.

Had so many plans

"I feel betrayed and broken. We had so many plans for this decade, but it wasn't meant to be," she said in a tribute.

However, she lauded Wright's colleagues and batchmates of the Glenmuir High School class of 1994 for planning a surprise anniversary party.

"His batchmates sent me a nice floral arrangement, and they wrote 'from Duwayne Wright', so that was very touching. It was hard, but families and co-workers made it easier for me," Kemoy said. Superintendent Christopher Phillips said Wright had been committed and dedicated to duty.

"He was one of the corporals who stood out. Whatever was unfolding, if you called him at the last minute, Wright would always make it his priority to give his support. Clarendon has been experiencing a number of this kind of situation as it relates to the death of our colleagues," he said. "We've lost three corporals in a short time, so next weekend, we'll have another funeral, and the following weekend, we'll have another funeral for another corporal. These are trying times for us, but as a family, we are bonding to comfort each other."

Among the mourners was Dr Desmond Brennan, who said his relationship with Wright had spanned two decades.

"He was a patient of mine at Chapelton Hospital, and our friendship grew stronger over the years. We fought and quarrelled with each other, but there was never a moment that we were disrespectful to each other. We saw each other as brothers," he said. He recounted the day he got news of Wright's death.

"I had to leave work immediately because of the impact it had on me. His loss is very telling on me," he said. Wright provided security services for Brennan during the 2016 general election.

"We had plans for him to be my security detail in the last election, but sadly, it didn't materialise. The JCF has lost an asset in Duwayne Wright," Brennan said.