Fury in Hanover after resident is shot by police 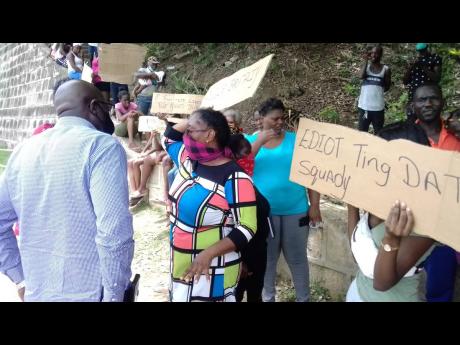 Twenty-eight-year-old Lineka Williams, who was shot under questionable circumstances last week, would have been in the Cayman Islands, where is lives, had it not been for the COVID-19 epidemic. Williams, a native of Elgin Town, Hanover, came back to the island late last year to take care of some divorce arrangements, and was here until he was shot by police.

According to the lawmen, shortly after 11 p.m. last Friday, they received reports that men were at a wake yard in the community, which was been held beyond the curfew hours allowed under the Disaster Risk Management Act, the key law used in the fight against COVID-19. They said that Williams was shot during a struggle.

The residents, however, have disputed the facts, as presented by the police. The matter is now being probed by the Independent Commission of Investigations (INDECOM).

Yesterday, angry residents of Elgin Town staged a massive demonstration in protest about the shooting. The residents mounted several roadblocks using stones, tree trunks, old motor tyres and furniture, along sections of the North Coast Highway, which leads from Montego Bay, through Lucea, and Negril. The protest resulted in a major traffic pile-up, which span in both direction for several miles, and this disrupted the daily flow of residents going to and from work, and students travelling to schools.

"From dem shoot mi son from Friday night, a pure run around mi a get. Dem a shub mi around and around ," Benieve Jowrey, the mother of the injured man, told THE STAR.

"Wen mi go up a the hospital dem have him handcuff to a bed, an him shout out an tell mi seh from dem carry him up deh, dem nuh mek him use the bathroom. When mi a try fi enquire from a policeman, dem run mi. One a dem sey a poison wi fi poison di boy," the mother said.