Father and daughter killed in Negril 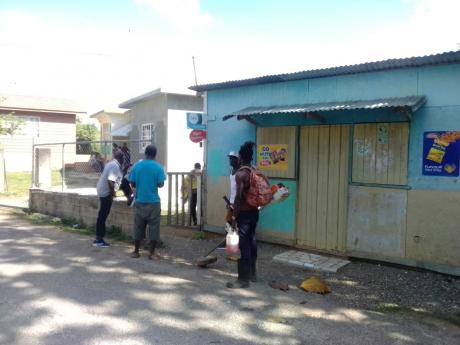 Residents of New Hope, Westmoreland, gather on Wednesday, outside the small shop in which Valney Kerr and his daughter, Brianna, were killed the night before.

Families members and close friends of slain security guard, 47-year-old Vanley Kerr, and his 18-year-old daughter, Brianna, are still in shock, after the pair were gunned down inside their small family shop in New Hope district in Negril, Westmoreland, on Tuesday.

The incident occurred about 9:30 p.m., while Kerr, his common-law-wife Dawn Nelson, their daughter Brianna, and other relatives were inside the shop enjoying a game of dominoes.

Two men posing as customers reportedly entered the establishment and ordered some cigarettes.

As they were about to be served by Brianna, the men brandished handguns, held the occupants at gunpoint, and ordered them to lie down on the floor.

Before Brianna could react, one of the gunmen turned his weapon on her, and shot her multiple times. Kerr ran towards the men when he too was shot multiple times.

The gunmen then escaped in the area on foot. Kerr and Brianna were rushed to the Savanna-la-Mar Hospital, where the teenager was pronounced dead, and Kerr died while undergoing treatment.

Nelson told THE STAR that her daughter and her common-law husband were two of the most humble human beings she knew, and they did nothing to be killed.

"Vanley a jus one humble security guard who work a cambio a Negril, and Brianna just lef Rusea's school di other day and pass har six subjects," she wept bitterly.

She said that Brianna, who was a brilliant business scholar, had started attending a hospitality school in Savanna-la-Mar, where she was studying cosmetology.

During the interview, the distraught Nelson broke down and had to be immediately rushed to hospital for medical treatment.

Westmoreland is still under a state of public emergency. Tuesday's double killing has taken the 2020 murder count in the parish to seven.