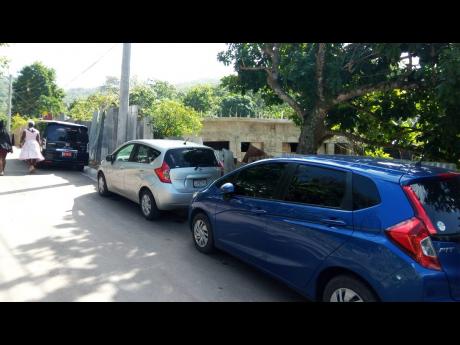 Photo shows a number of vehicles parked outside the home of Rajui Brown, the man who allegedly shot himself to death at Binns Lane in Elgin Town, Hanover, last Saturday.

The Lucea police in Hanover have commenced an investigation into the death of a man who allegedly committed suicide by shooting himself with an illegal firearm at his home in Elgin Town, Lucea, last Saturday.

The deceased has been identified as 26-year-old Rajui Brown, labourer of Binns Lane in Elgin Town.

"Rajui was a very quiet youth inna the community, him don't give trouble and him always a help people. But since of late wi notice seh him draw up inna him shell, and wi hear seh him depress but none a wi don't know a what cause it," one community member who identified himself as Bigga told THE STAR. "Him lef all a him family dem inna stress and shock because nobody neva expect him fi do something like that."

Reports are that about 1:40 a.m., Brown was at home with other family members when relatives heard loud explosions sounding like gunshots coming from the direction of his bedroom.

They rushed to investigate and discovered Brown lying on the floor with a gunshot wound to his upper body.

Further checks led to the discovery of a 9mm pistol along with a magazine containing eight live rounds.

The police were summoned and upon arrival, the relatives handed over the illegal firearm to them.

Just a few days before that incident, Ennis Malcolm, an electrician in the community of Jericho, was found hanging in his mother's house.

It is believed that he killed himself after his girlfriend told him their relationship was over.