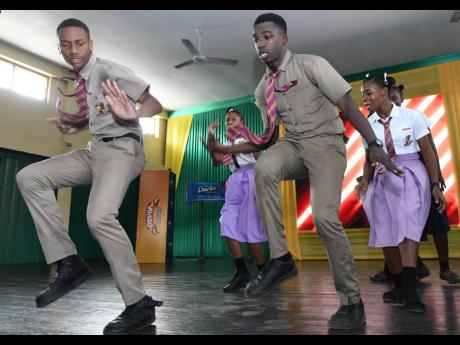 Pembroke High School students show off their moves at the Dancin’ Dynamites’ launch on Wednesday.

Executive producer of the Charles Chocolates-sponsored Dancin' Dynamites, Jennifer 'Jenny Jenny' Small, says the new season of the competition is going to be super special.

It celebrates 15 years in 2020 under the theme 'Teens and Teams Tun Up the Scene', for which the judges, according to Small, expect a higher level of creativity.

Small said that the judges, Orville Hall and Kerry-Ann Henry, "want to see growth, with this being our 15th year. The teenagers and various teams must research and be ready to bring it. The minds must be at work with those skilled legs."

At the competition's launch at the Excelsior High School on Wednesday, organisers announced that the competition was broadening the scope of participants, by allowing students and young teenagers to enter.

"It is so important for parents (and the guardians) of the young participants to be involved ... we want their permission and the children need their support," Small told THE WEEKEND STAR.

The show's executive producer said that the prizes on offer are worth dancing for.

For example, Small said that nine dancers could win scholarships to go to schools like the Edna Manley College, Caribbean Maritime University and Excelsior Community College, "with major expenses paid."

So far, the aesthetic appeal of the competition to the local dancers is the cash prizes, opportunity to perform for tourists, and to travel overseas.

This year, it is awarding any school group making it to the top four a prize of $500,000, not counting the grand cash prize of $1 million.

But there are also many other chances to win throughout the season.

"There will be intriguing challenges such as pairing technology in a routine, so we urge persons to enter and stay tuned. The weekly Charles Chocolates prizes, Burger King will provide prizes for the weekly teen challenges. Cheerios will be giving $100,000 to the top school for their breakfast programme, and Interglobal will give security cameras to the top school," said Small.

Auditions begin in May Pen, Clarendon, on Saturday, January 11, at the FLOW store in Bargain Village.