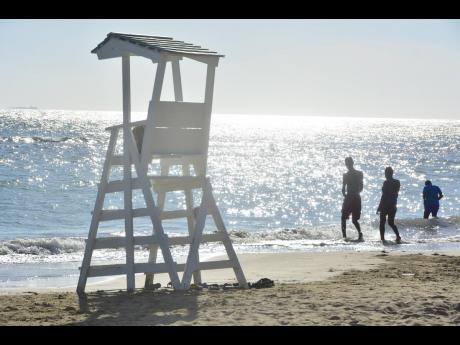 Moments before 70-year-old Norval Campbell decided to go into the water at Lyssons Beach in St Thomas, his niece Juline, Golding snapped a photo of him.

Campbell and his wife, Alma had journeyed to the eastern parish as part of a church trip with members of the United Church in Jamaica and the Cayman Islands, Mannings Hill, St Andrew.

"It is an annual church trip. It is the first time we were going to St Thomas. We were there having a good time," Golding said.

But what was supposed to be a joyous occasion last Saturday turned to tragedy after Norval Campbell got into difficulty and drowned.

According to reports from the Morant Bay police, Campbell was in the water with church members at 12:30 p.m. when he got into difficulty.

The police were alerted and he was taken to hospital where he was pronounced dead.

Recalling the moments leading to his death, his niece said that she was asking for him because she did not see him for some time. She added that people were keeping an eye out for him because he was an elderly man.

"At one point I did not see him and I asked around, and they said he is in the water with his wife and she is very attentive to him," she said.

"Everyone was watching him because he is 70. Two minutes after asking about him, I hear his wife crying out, 'Help! Help!' I ran down and saw him floating in his stomach and I started shouting, Help! Help! Other members who were on the trip tried going out for him but they are not good swimmers, so it took some time to get him," she continued.

Golding told THE STAR that her uncle is a very good swimmer but the waves were a bit rough that day. She said that his three sons are heartbroken and are finding it difficult to cope but they are trying to hold it together for their mother.

She said that the family is in shock. His wife, , has barely spoken since Saturday.

"You know just going out to have fun with your husband and not coming back home with him is really hard. They have been together over 30 years but they have been married for about five years or a little more. She will say a few words and then start crying and then she gone to her silent mode. She is taking it rough, so we have to be watching her," she said.

The niece described Campbell as a jovial, quiet person who is very well known in the Golden Spring community.

"He will be missed," she said.