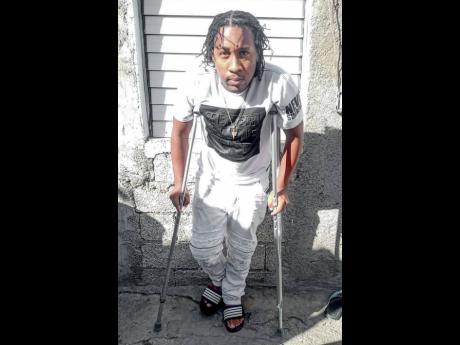 Peanut Cline, who is currently recovering from a hit-and-run, tries to stand up with the help of crutches.

Up-and-coming artiste Peanut Cline is on the road to recovery after a road crash on March 7.

Peanut Cline was driving his motor bike from Papine to Gordon Town when he just felt his body go airborne.

"I was literally three minutes away from my house and almost never made it. The hit throw me five feet in the air and I landed hard on the ground," he told THE STAR. "Is my helmet and God save me. I want to say every other bikeman should wear a helmet and the right gears... too many are riding without these things and it really made a world of difference by saving my life."

He said that he was placed in the vehicle and taken to the University Hospital of the West Indies, and that the driver even took his number, but has still not called him. Peanut Cline, given name Oshayne Kamptha, was hospitalised for one month with two broken bones in his right hip and a fractured pelvis. But is not yet able to walk properly.

"I didn't have to do surgery, according to the doctors, I'm young and the bones should heal over time with the right care and therapy. They did a lot of X-rays and were able to join them back. While in the hospital they put bottles of water on my legs to keep them straight," he said. "It gets frustrating because I'm trying to use the crutches but it hard. Is a wicked feeling when you can't walk and used to going about to do my business. Mi write at least five songs a day since I'm home."

As a performer and 'nuts man', he is much-admired by persons in the Papine area, identifiable by his formal attire and a skateboard that he used to move around as he sold peanuts and Jamaican pastries. He said it could be months before he is able to walk without pain or discomfort, but he is grateful he was not paralysed.

"I'm grateful to the people from UTech and UWI who help me out. They know me both as the peanut man and as the trying artiste. Also my mother and sister been really helping me out, but it is hard on them," shared Peanut Cline. "I just want to get back on the hustle and into the studio. I don't even have a manager anymore since the place lockdown but there are several unreleased songs," he said.